VP Harris in Chicago: Vaccinated can be ‘role models’ for friends, family

Visiting a coronavirus vaccination site on Chicago’s Near South Side Tuesday, Vice President Kamala Harris declared, "we can see a light at the end of the tunnel."

CHICAGO - Visiting a coronavirus vaccination site on Chicago’s Near South Side Tuesday, Vice President Kamala Harris declared, "we can see a light at the end of the tunnel."

Although officials say Chicago is receiving fewer vaccine doses per capita than the rest of Illinois, Mayor Lori Lightfoot told the vice president that Chicago will meet President Joe Biden’s April 19th deadline for everyone to be eligible to get a shot.

Lightfoot boasted that her focus on racial equity is the reason Black and brown Chicagoans have now received more than 50% of the vaccines given in the city. In December, that share was 18%, the mayor said.

Gov. JB Pritzker and both of Illinois’ Democratic US senators, Dick Durbin and Tammy Duckworth, joined the tour of the vaccination site at the Union Hall of Local 399 of the International Union of Operating Engineers, located at 2260 South Grove. 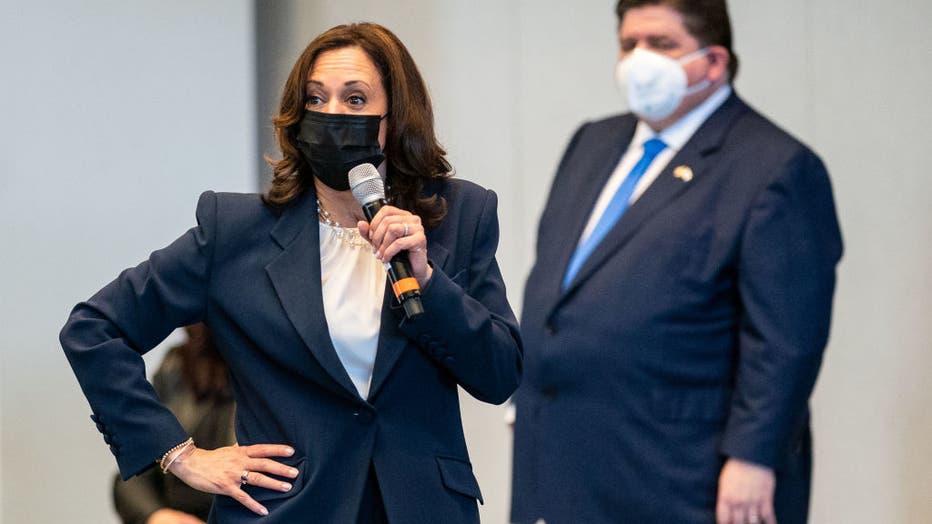 A spokesman for the Chicago Federation of Labor said it is open to any union member who is eligible to get a shot. The CFL claims it is the first vaccination site in the US jointly set up by organized labor and a local government. The CFL said the location expects to administer about 2,400 shots this week and hopes to deliver more next week.

Vice President Harris was invited to town by Mayor Lightfoot, who said they had a private conversation after the tour. Lightfoot would not say much about it.

However, every politician at the event had a long wish list that they hope to be included in President Biden's proposed $1.9 trillion public works construction plan.

"It’s about building back up our infrastructure in a way that we leapfrog. So, it's not just about repair. It's about building things," Harris said.
The vice president called Biden the most pro-union president in American history. 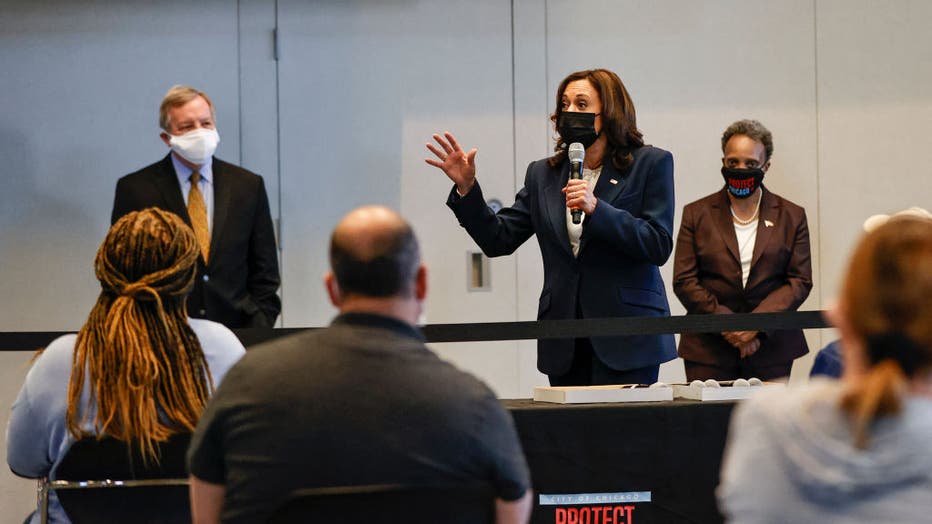 US Vice President Kamala Harris speaks during her tour of the International Union of Operating Engineers Local 399 union hall, which currently serves as a Covid-19 vaccination site in Chicago, Illinois, on April 6, 2021. (Photo by KAMIL KRZACZYNSKI /

VP Harris took no questions from reporters and she made no public reference to a ruling revealed Monday by the US Senate's parliamentarian. Majority leader Chuck Schumer (D-New York) said it empowers Democrats to enact Biden’s infrastructure plan without facing a threatened Republican filibuster. The parliamentarian ruled Democrats could use an obscure procedure -- "Budget Reconciliation" -- to pass the measure. Democrat would still be required to win the support of all 50 of their senators, with Vice President Harris able then to cast a tie-breaking vote.

Harris also on Tuesday urged Chicago union members to share their experience receiving a COVID-19 vaccine and act as "role models" for family and friends who may be reluctant even as Illinois prepares to open access to all adults.

"We’re all here to make a statement we understand the significance of getting vaccinated, that it’s bigger than us," she said. "We are doing it because we know this is a room of role models and people look to you to see how things should be done."

Illinois health authorities reported 2,931 confirmed and probable cases of COVID-19 on Tuesday and 13 additional deaths. Since the start of the pandemic, Illinois has reported more than 1.2 million cases and 21,395 deaths.