It's called "Wanted Wednesday” and it's quickly becoming a social media sensation for the Orland Park Police Department.

ORLAND PARK, Ill. - Every Wednesday, police post a video of someone caught in the act of committing a crime, hoping the public can help bring the suspect to justice.

It's called "Wanted Wednesday” and it's quickly becoming a social media sensation for the Orland Park Police Department. It's done with a sense of humor and style that has captured the public's attention and quite a few criminals.

Surveillance videos of people doing bad things are everywhere these days. Like many police agencies, Orland Park for years posted old-fashioned police blotter pictures and descriptions of suspects to its website and Facebook page, without much luck.

"It had kinda fallen off,” said Lt. Ken Rosinski, Orland Park Police Department. “We didn't have very many viewers. So we were looking for a way to increase our viewership among our local community."

So, two years ago, Lt. Rosinski and Sgt. Wayne Lee decided to try something different.

They decided to call it “Wanted “Wednesday.” It’s short videos combining surveillance video with music, a humorous theme, and lots of bad puns. 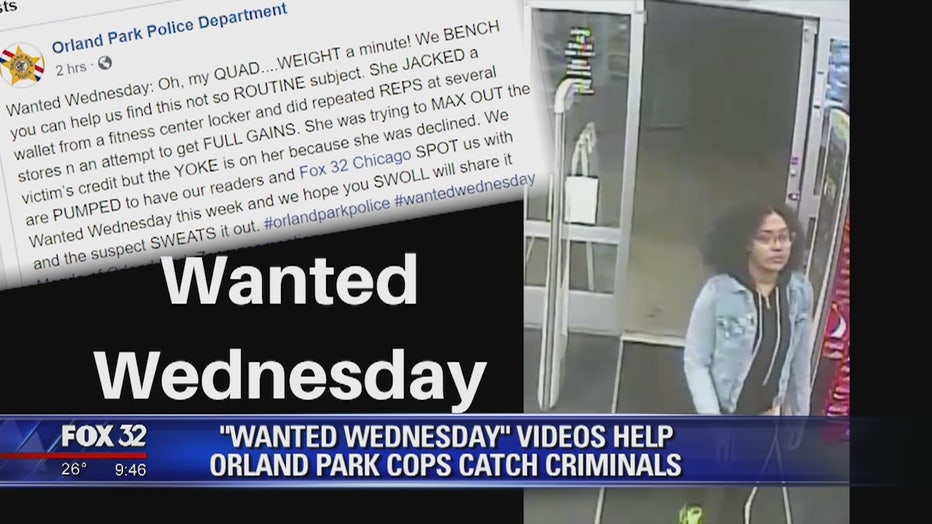 "People seem to love it,” said Sgt. Lee. “We get a lot of people to share it amongst their friends. Talk about it. They comment."

A theft of perfume from an Orland Park Ulta store is titled "eau de humanity!"

"Got milk" shows a woman stealing several gallons from Costco.

A theft from an adult novelties store is called "buzz kill."

The "romaine calm" describes a rip-off at a vegan restaurant.

"We tried to have a little fun with it,” said Lt. Rosinski. “By making some funny comments. Some puns here and there. And people loved it. Our viewership really expanded."

Then, there's the music.

"I Want a New Drug" plays as we see a couple pocketing over the counter meds.

"Within a day we had a phone call from the apartment complex that he was staying at, telling us this is your person and he's trying to sell all this tide to our residents,” said Lt. Rosinksi.

So far this year, there have been 45 “Wanted Wednesdays” for the Orland Park Police Department. Of that number, 22 suspects have been identified and 18 have been arrested.

"That is unheard of,” said Lt. Rosinksi. “The public has really been a great source for us."

A social media success story for cops, not so much for the criminals.

“They look for it on Wednesday,” said Sgt. Lee. “If it's not out there at a certain time on Wednesday, they start asking 'where's the Wanted Wednesday? What time is it coming out?'"