WASHINGTON, D.C. - The MLB game between the San Diego Padres and Washington was halted in the sixth inning Saturday night after four people were shot outside the stadium in Washington, D.C.

More than two dozen police cars, ambulances and fire engines were on the street outside the third base side of Nationals Park.

Police said that two people were found shot outside the park, and two others with gunshot wounds showed up at the hospital.

The Padres had just taken the field for the bottom of the sixth when several loud pops were heard from the left field side of the ballpark.

Fans sitting in left field quickly began leaving through the center field gate. A short time later, fans along the first base side began briskly leaving their seats. Some fans crowded into the Padres' dugout on the third base side for safety as sirens could be heard from outside the park.

The Nationals then announced there had been an incident was outside the stadium and posted a message on the scoreboard telling fans to remain inside the stadium.

About 10 minutes later, the team tweeted: "A shooting has been reported outside of the Third Base Gate at Nationals Park. Fans are encouraged to exit the ballpark via the CF and RF gates at this time." 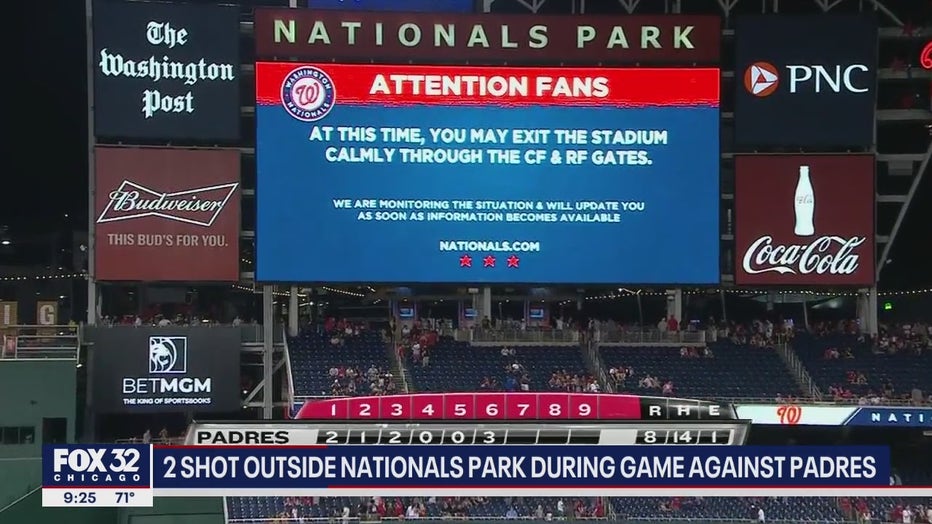 Over 200 people gathered to grieve for 72-year-old Keith Cooper, a Vietnam veteran who died in a carjacking attempt near Hyde Park this week.