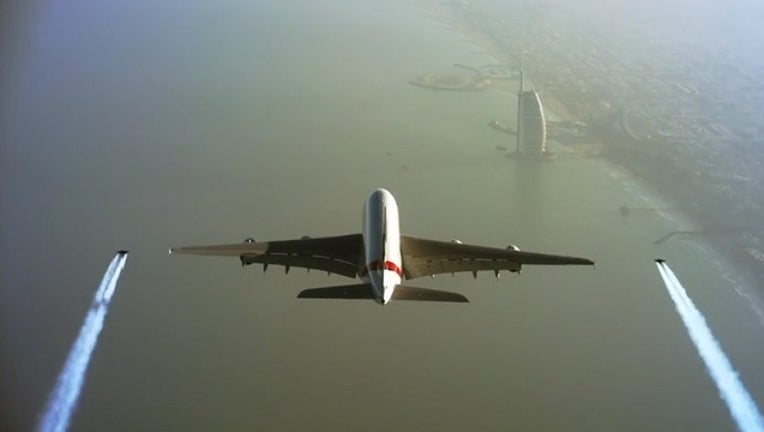 It looked kind of like a scene from James Bond movie; Two men in jetpacks meet up with a large Airbus A380 4,000 feet over Dubai.

It is a 1:39 of aerial action which shows experienced Jetman Dubai pilots Yves Rossy and Vince Reffet, wearing Kevlar wings and four jet engines strapped to their backs, jump from a helicopter to meet up with the world’s largest passenger aircraft piloted by Emirates Captain Abbas Shaban.

A behind-the-scene video describes that the Jetmen had 10 minutes of fuel to keep up with the high-powered aircraft.

"We will be mosquitos flying with an eagle or a condor," Jetman Yves Rossy said in the video.

"To play with the a380... It is a big machine. We never flew with it before. We trained ourselves as much as possible but then when we see the helicopter there is this real part of unknown," Said Vince Reffett, Jetman Junior.

Organizers admitted there were a lot of risks with the mid-air meet-up. They spent months choreographing and storyboarding the stunt before taking to the sky. And safety was their highest priority.

"It became more of challenge and opportunity to show our skills," said Gareth Lloyd Evans, Manager of Flight Operations for the Emirates.

At any given time, there were four aircraft plus the two Jetmen in airspace over the Palm Jumeirah, where the aerial acrobatics took place. They all had radio communication with each other.