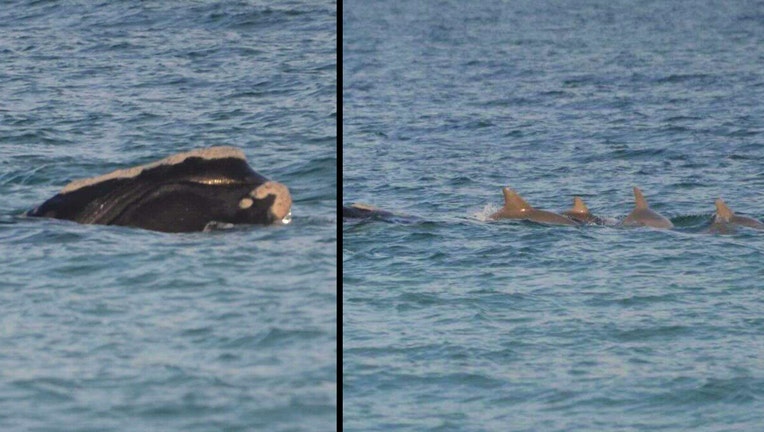 MELBOURNE, Fla. - A right whale and her calf were spotted swimming near a Central Florida beach while being surrounded by a pod of dolphins, photos and video shows.

Betty Gonzalez, a woman who lives along Melbourne Beach and enjoys walking every morning, spotted a right whale mother and her calf on Friday.

She said the whales were surrounded by a pod of dolphins as well.

"So many pictures, I couldn’t choose. Enjoy," she wrote on Facebook.

She also posted a video of the interaction, stating "what a great way to end the work day! They are heading South past [Sterling] house."

MORE NEWS: Newborn baby giraffe dies at Nashville zoo after being stepped on by her mother

She explained to FOX 35 that these animals are critically endangered.

"I found out that this is actually a yearling and they can be tricky to ID, this came from the Marine Resources Council Right Whale Monitoring."

She added that apparently, the yearling's name is 'Harmonia," according to a woman who works at the 888-97-WHALE hotline.

Earlier this January, Gonzalez discovered something else interesting while on her morning walk. She found a six-feet long shark washed ashore. It was surrounded by vultures.

"It's just sad, especially because I don't know what killed it," she told FOX 35. "I flipped the shark over, I just kind of looked to see if there were any kind of markings and I can't tell how it was killed."

Gonzalez believes that the shark is a sand tiger shark. However, in her 25 years living in Florida, she's never seen anything like this.

A Brevard County woman was out for a walk on Melbourne Beach when she stumbled across a large shark that had washed ashore.

The shark washed ashore before it could be investigated by the FWC.