WASHINGTON - Declaring that "loyalty to a single head of state is not patriotism," a federal judge Tuesday gave 18 months of probation to a Crest Hill couple for their role in the U.S. Capitol breach on Jan. 6, 2021, and she ordered them to perform "hands on" community service.

The judge said the couple was "in the thick of it" during the breach, and she questioned the remorse they expressed before learning their sentence.

She also told them "you did not personally do anything destructive" that day.

Given that the Schuberts are in their 60s and 70s, the judge said she didn’t think home detention made sense. Rather, she said she wanted them to perform substantial community service because "we need more than just words and more than just letter writing."

Rep. Kinzinger speaks with FOX 32 on the one-year anniversary of the Capitol Riot.

The Schuberts pleaded guilty in December to a misdemeanor count of parading, demonstrating or picketing in a Capitol building. Prosecutors said they entered the Capitol through a broken window shortly after Congress evacuated at 2:20 p.m.

The couple spent more than 30 minutes in the Capitol starting at 2:22 p.m., prosecutors said. They visited the Rotunda and a nearby hallway, and Amy Schubert entered a congressional meeting room, records show.

Court records also show Amy Schubert sent text messages telling someone on the day of the breach that "A woman was shot 20 feet in front of use [sic]. We’re ok. Got into a little confrontation w Antifa." That was an apparent reference to the fatal shooting of Ashli Babbitt.

She also texted someone two days later and said, "I’m not sure if we should have pix on fb from DC event — I don’t want to help government to be able to match up exactly how we looked/what we were wearing that day."

The feds wound up tracking down the Schuberts in part through video that purportedly shows Amy Schubert wearing a jacket that read "Plumbers & Pipefitters Local Union 422 Joliet IL." 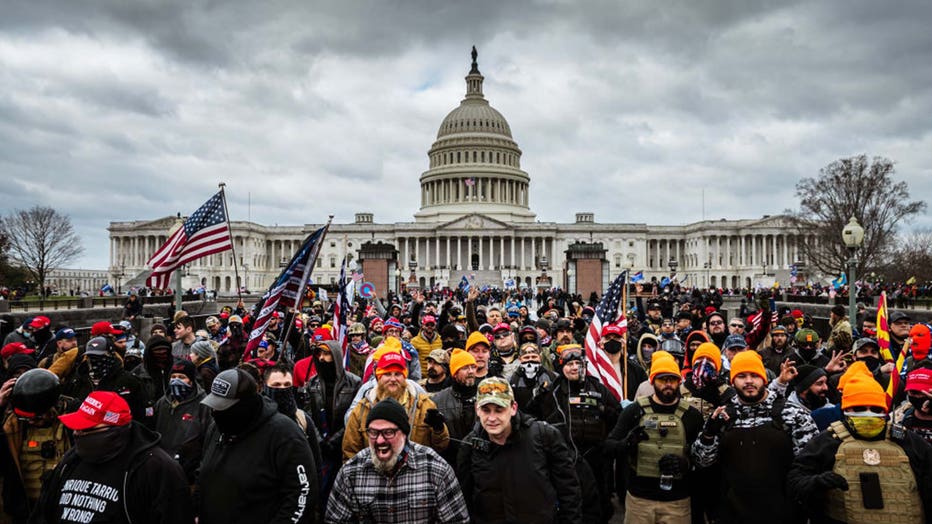 FILE - Pro-Trump protesters gather in front of the U.S. Capitol Building on Jan. 6, 2021 in Washington, DC.

The Schuberts wrote letters to the judge earlier this year apologizing for their role in the breach and discussing the reading they’ve done to pursue a "greater awareness of the world."

Before they were sentenced, John Schubert told the judge, "when I do something wrong, I’m willing to pay the price for what I did. I’m guilty and I made a mistake."

Amy Schubert said, "I am very sorry for what we did. … I can’t just let this opportunity go by and not learn from this. It’s been hard to wait for each court appearance, but it’s been good because it’s given me more time to read things, learn things, not be so one-sided. And I am very sorry."