A Texas man was captured on video rescuing his dog that fell into a frozen pool. (Credit: Dan Holmes)

SOUTHLAKE, Texas - Video of an owner rescuing his dog from a frozen pool in Texas is a timely reminder to keep a close watch on your pets amid winter weather.

Dan Holmes of Southlake, Texas posted video to his Facebook page showing his unsuspecting pup crashing through the ice covering his backyard pool and getting stuck. Luckily, Holmes wasn’t far away and was able to come to the beleaguered dog’s rescue.

The video shows Holmes casually sweeping away snow from the columns in his backyard as his two dogs play in the background. 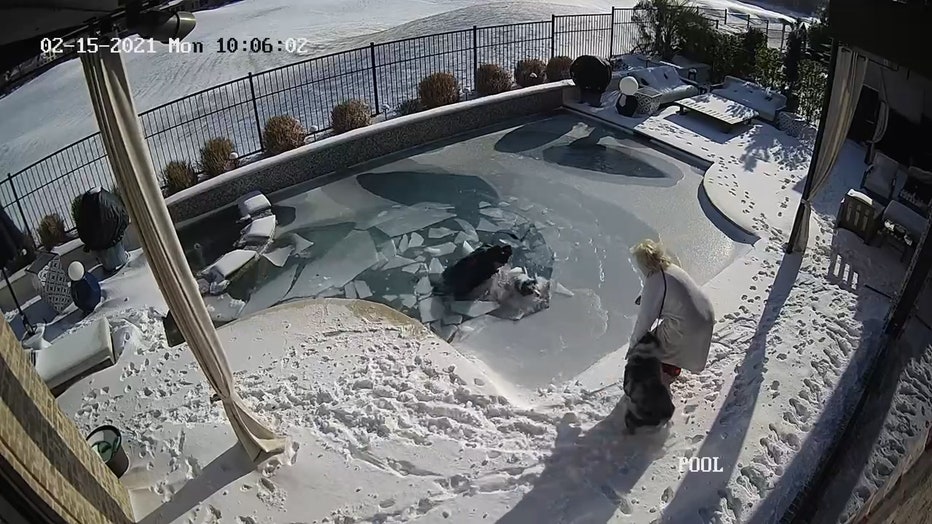 Dan Holmes seen rescuing his dog from a frozen pool.

RELATED: Hundreds of thousands without power for second day across North Texas as blackouts continue

In the video, both of Holmes’ dogs, Christi and Colbi, make their way around the frozen pool. Christi then decides to venture out onto the surface of the ice, approaching a thinner-looking patch of ice and suddenly plunging into the bitterly cold water.

"I was cleaning snow away from the windows when my wife starts screaming all of a sudden and I turned around and saw Christi hanging onto the ice," Holmes said.

Christi, Holmes’ 7-year-old Australian shepherd, is a water dog and is used to getting in and out of the pool at her leisure, but the pool’s new appearance intrigued the pup.

"I was petrified. I didn’t really know what to do," Holmes said after he saw Christi struggling to cling to the ice in their pool. "I went to the side and she was at the middle, and I couldn’t get to her, so I put my hand down and fell in and rolled over and grabbed her and pulled her out as fast as I could."

Holmes and Christi made it out of the frozen pool, very cold, but unscathed.

"We wanted to share this video as a reminder to just watch your pets," Holmes said. Holmes and his family have been through a snow storm before about five years ago, but he said it was not nearly as long or as cold as this one.

RELATED: Record-setting winter storm charges across the US, with 2nd storm on the way

"Warning, if you have pets be careful. Watch this video, thank goodness I was out near the pool. So Michelle Davis I did try your cold plunge but not on purpose. It was pretty darn cold," Holmes Facebook post read.

Holmes said he went to check on his pool Tuesday morning and it has frozen solid, so he isn’t worried the same incident will happen twice, but he will be keeping a very close eye on his dogs.

Southlake, which is located just northwest of the Dallas-Fort Worth International Airport, experienced temperature highs in the mid-20s to low 30s and plummeting low temperatures in the teens and single digits as a major winter storm slammed North Texas and surrounding areas.

Gusty northwest winds kept wind chills below zero Monday morning. Even as the temperatures climbed into the teens in the afternoon, the wind chills were near zero.

A Wind Chill Warning has been issued for most of North Texas until Tuesday at noon, due to wind chills which are expected to be as low as -20.

A Federal Emergency Declaration has been issued for Texas as the entire state deals with the severe winter weather.

There were more than 1 million power outages reported across North Texas, as the Electric Reliability Council of Texas (EROCT) has asked Texans to conserve energy due to record electricity use during the winter weather and extreme cold temperatures.

FOX 4 News contributed to this report.