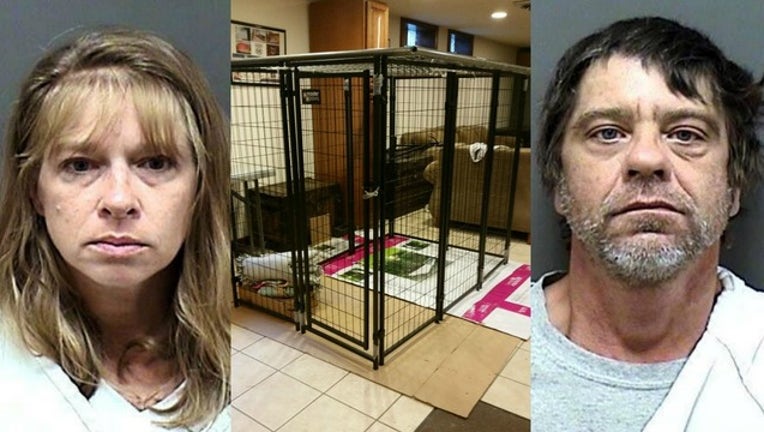 Gail Lalonde, 47 (left), and Dale Deavers, 48, were arrested on September 6, 2017, in Norway, Wisconsin, for confining a 9-year-old girl in a dog kennel (center) in her home. (Racine County Sheriff's Office)

TOWN OF NORWAY, Wis. (AP) -- A grandmother and a man are accused of keeping her 9-year-old granddaughter padlocked inside a wire dog kennel in the basement of a house in southeastern Wisconsin.

Racine County sheriff's deputies and social workers investigated the home near Wind Lake after a teacher made a child abuse complaint Wednesday.

Gail D. Lalonde, 46, and Dale A. Deavers, 48, were each charged Friday with causing mental harm to a child, false imprisonment, manufacturing marijuana and maintaining a drug trafficking place.

"I have not seen anything like this in my 23 years of law enforcement experience," said Racine County Sheriff Christopher Schmaling. "I've seen people do horrific things to other human beings, but I've never seen anyone treat a child like an animal."

"This kid was forced to go into this cage and I just can't imagine putting a child in a cage like that," Schmaling said. There was cardboard on the floor, a few blankets, but no pillow, officials said.

Lalonde told investigators she kept the girl in the cage at night because she is a danger to herself and others, according to a criminal complaint.

"She hurts animals, threatens to kill us, eats Ridex (septic system cleaning solution) and cleaners. I'm trying to keep her safe," the complaint quoted Lalonde. The girl has been kept in a cage at night for about two weeks, the complaint said.

Racine County Human Services removed the victim and a sibling from the residence and placed them in protective custody. Wind Lake is about 25 miles (40 kilometers) southwest of Milwaukee, Wisconsin.

"Both are sleeping in warm beds tonight," Schmaling said. "In false imprisonment contrast, the two defendants are locked up in our jail where they belong."

Schmaling says the grandmother was apparently their caregiver and that deputies were trying to find the biological parents.

Investigators also found an active marijuana growing operation behind a false wall in the basement where the girl was kept in the cage, the complaint said. Twenty plants, nearly 122 grams of marijuana and growing equipment was confiscated, officials said.