The suspect reportedly approached the counter at a McDonald’s in Virginia to complain about the missing condiment. After threatening the employee, the unidentified woman allegedly struck the teenage worker.

The incident occurred at a McDonald’s in Henrico County, WTVR reports. Apparently, the woman was upset that her sandwich did not have ketchup on it and confronted the victim at the restaurant’s counter.

The teenage victim’s mom told the news outlet, “She asked my daughter if she had a problem and my daughter said, 'No, I have no problem' and then the woman said, 'Oh we can take this outside.'” 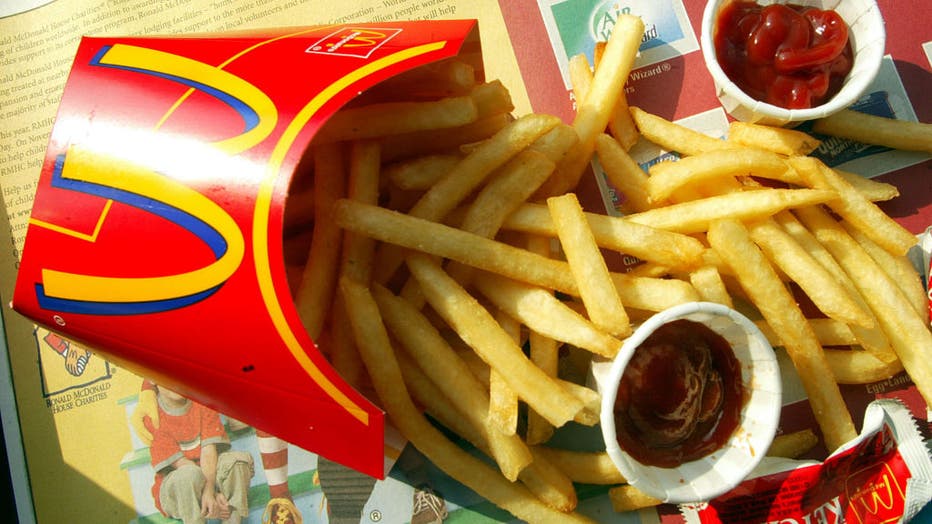 FILE - French fries are shown in a McDonald's restaurant on Sept. 3, 2002. (Photo by Mario Tama/Getty Images)

Authorities have reportedly offered a cash reward for tips that lead to the suspect’s arrest. The woman was last seen wearing a tie-dyed shirt.

This is not the first violent incident to occur between a fast-food worker and an angry customer.

In late February, Fox News reported that a male suspect attacked workers at a McDonald’s when they refused to accept payment for a cup of water.

According to local reports, the 44-year-old suspect approached the counter and asked for a cup of water. The cashier reportedly informed the man that the cup would normally cost 32 cents, but since the system was down, she offered the cup for free.

At this point, the suspect reportedly became upset and attempted to give the employee a $100 bill. After she returned it and wouldn’t accept it, he reportedly began to hit her in the face, knocking her to the ground.

When another employee attempted to intervene, the suspect struck her as well. According to the outlet, he threw a cookie container at the cashier, although it did not hit her. He then left the restaurant.

Police later arrested the man and charged him with two counts of assault and possession of drug paraphernalia.