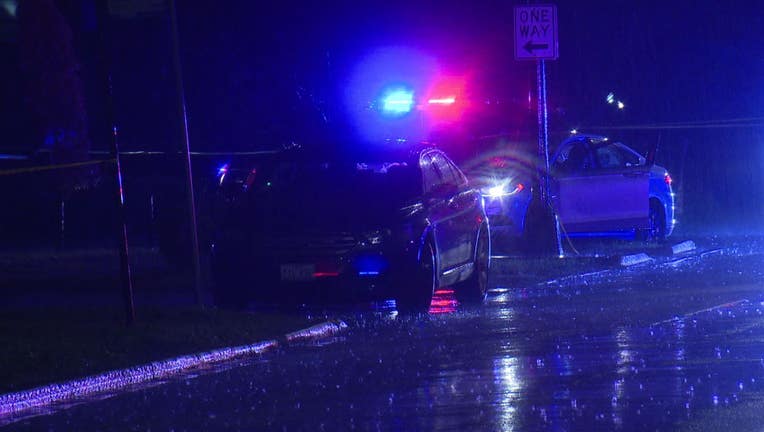 HAMMOND, Ind. - A police chase originating in Hammond, Indiana crossed state lines Saturday and ended in Chatham on the South Side with a woman shot by officers and a toddler injured in a crash.

The sequence of events started when Hammond police responded to a call about noon of an armed robbery in the 6400 block of Indianapolis Boulevard, police said in statement.

Officers spoke with two men, 66 and 73, who said they were stopped at a train crossing, got out to get a bottle of water from the bed of their truck and were robbed at gunpoint by the male passenger of a silver Chevrolet sedan that had stopped behind them, police said.

Minutes later, officers received calls of shots fired blocks away near 173rd and Calumet Avenue, police said. A woman was driving from a residence said she was cut off by a gray Chevrolet sedan when she turned south onto Calumet Avenue from 169th Street.

A male passenger in the car that cut her off flashed a gun and fired it at her vehicle, but the woman was not struck, police said.

About 4:45 p.m., officers received a call from the same woman reporting she saw the shooter again near the same intersection, police said. As officers arrived to the area, the suspect ran to a silver sedan with a female driver and sped off.

Hammond police pursued them until the sedan crashed in the 8000 block of South King Drive, authorities said. A Hammond police officer fired his weapon, striking a 22-year-old woman who was described as a suspect. She was taken to University of Chicago Medical Center in fair-to-serious condition for treatment, a Chicago Fire Department spokesperson said.

A 3-year-old girl was also injured in the crash and was taken to Comer Children’s Hospital in fair-to-serious condition, according to fire officials. It was unclear if she was in the car with the suspects that were pursued by police.

Two men, 33 and 32, were taken to Little Company of Mary Hospital in Evergreen Park, the first in good condition and the second in fair-to-serious condition, fire officials said. One of them is believed to be a police officer.