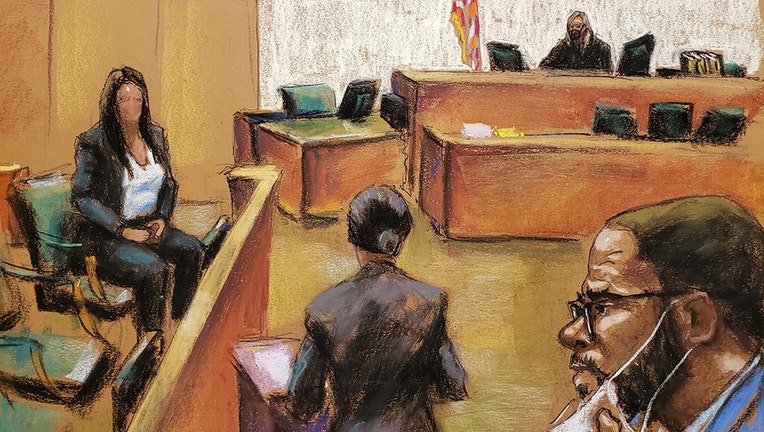 NEW YORK (AP) - She was an unsuspecting radio station intern in 2003 when she pursued what she thought would be a career-making interview with an R&B superstar — R. Kelly.

Instead, she had a horrific experience while locked in a darkened room for days, she's now testified years later in lurid detail. She said she still lives with a strong belief she was drugged and violated by Kelly while she was unconscious.

"I was sexually assaulted," the woman told jurors on Thursday at Kelly's sex-trafficking trial. "It wasn't something I invited."

The witness, who testified without using her real name, became the latest in a string of accusers to take the witness stand against Kelly since the trial began in New York City on Aug. 18.

Kelly, 54, has repeatedly denied accusations that he led a criminal enterprise that sexually exploited women, girls and even boys during a 30-year career highlighted by his anthem "I Believe I Can Fly." His lawyers have portrayed his accusers as groupies who are lying about their relationships with him.

Publicly recounting her experience with Kelly for the first time, the former radio intern said she was a 21-year-old single mother from Salt Lake City when she got up the nerve to approach Kelly's entourage about an interview.

"It would have been my very first huge celebrity interview," said the witness, now 39. "I thought it would kickstart my career."

She was invited to fly to Chicago and meet Kelly at his "Chocolate Factory" music studio, all paid for by the Grammy-winning recording artist. There, she was greeted by someone who made her sign a non-disclosure agreement, demanded personal information about her family and surprised her by asking if she "needed protection" — specifically, a condom, she testified.

She was told to wait alone for Kelly in a windowless room. When she tried to step out, she discovered that the door was locked from the outside and that, after banging on the door with no response, she needed permission from Kelly to go to the bathroom or anywhere else, she said.

"I was scared. I was ashamed. I was embarrassed," she said.

The witness claimed two days passed before she was finally given something to eat — Chinese takeout and a soda. After only a few bites and sips from her meal, she passed out on a couch, she said.

She awoke to find that someone had taken off all her clothes and felt "wet stuff" between her legs and on her thighs, she said. She also spotted Kelly in the corner pulling up his pants, she said, making clear to her he had assaulted her.

Kelly left the room, saying he would be back soon, she said, the last time she saw him. What felt like another few days had passed before she was given a flight home, she said.

She said on the way out of the studio, an employee warned her to keep her mouth shut about what had happened. The way it was put: "Don't f--- with Mr. Kelly." She took it as a potential threat against her child and family.

As he has with other accusers, defense attorney Deveraux Cannick pressed the witness on why it took several years for her to come forward with her accusations. He noted too her admission that she had a cell phone when she alleges she was locked in the room.

"Did you call 911? After you were raped, according to you, you didn't call 911?" Deveraux asked on cross-examination.

Another woman who testified on Thursday was someone who appeared on a sequel to a widely watched documentary series — "Surviving R. Kelly" — that portrayed him as a sexual predator. She has described having a tumultuous relationship with him but hasn't accused him of any crimes.

The government instead was seeking to use her to corroborate testimony from other accusers that Kelly used spankings and other discipline to make women he was allegedly exploiting stay in line over months or years.

"It was fun in the beginning," she said of her time with him. However, she said, it later became "controlling."