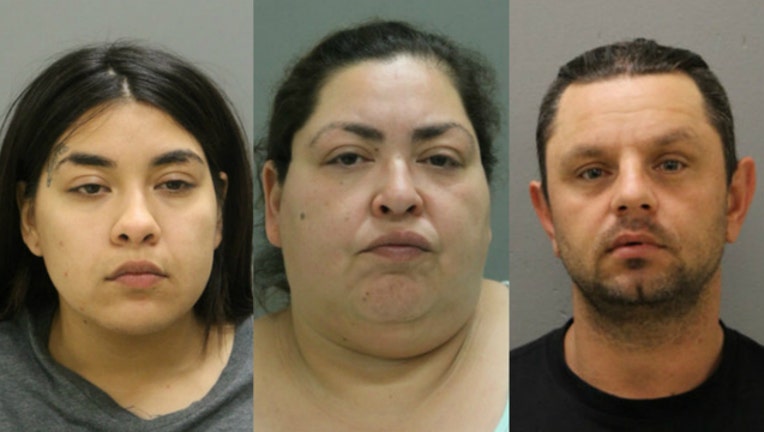 CHICAGO (AP) - A Chicago woman and her adult daughter were formally charged Wednesday in the killing of a pregnant teenager whose baby was cut from her womb with a butcher knife.

Clarisa Figueroa, 46, and her 24-year-old daughter, Desiree Figueroa, are charged with first-degree murder in the April 23 killing of 19-year-old Marlen Ochoa-Lopez, whose body was found last month in a garbage can behind the Figueroas' house on the Southwest Side of Chicago. Clarisa Figueroa's boyfriend, Piotr Bobak, is charged with concealing a homicide.

None of the three defendants spoke during the brief indictment hearing in Cook County court. About two dozen supporters of Ochoa-Lopez attended, but they didn't speak to reporters after leaving.

Authorities contend that not long after Clarisa Figueroa's adult son died of natural causes, she told her family she was pregnant. They say she plotted for months to acquire a newborn, and that she posted an ultrasound and photos of a room decorated for a baby on her Facebook page. In March, she and Ochoa-Lopez connected on a Facebook page for pregnant women

The two first met in person around April 1, when Ochoa-Lopez went to the Figueroas' house and left unharmed, prosecutors allege. The teen returned on April 23 to accept Clarisa Figueroa's offer of free baby clothes, and as Desiree Figueroa was showing Ochoa-Lopez a photo album of her late brother to distract her, Clarisa Figueroa sneaked up behind her and strangled her with a cord.

Once Ochoa-Lopez stopped showing signs of life, Clarisa Figueroa cut the baby from her womb and she and her daughter wrapped the teen's body in a blanket, put it in a plastic bag and dragged it outside to a garbage can, according to prosecutors.

Later that day, Clarisa Figueroa called 911 claiming that her newborn baby wasn't breathing. When first responders arrived, the child was blue. They tried to resuscitate the infant and took him to a hospital, where he remains in critical condition. Police have said the baby suffered severe brain damage and is unlikely to survive.

The defendants are due back in court June 26.