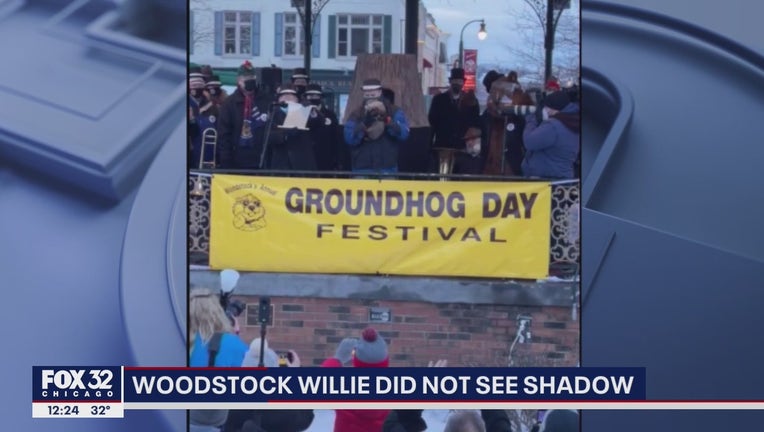 WOODSTOCK, Ill., - The country’s most famous groundhog may have predicted six more weeks of winter out in Pennsylvania on Tuesday morning but the one in the Illinois community where Bill Murray made the rodent a movie star didn’t see it that way.

In the northern Illinois community of Woodstock, where Murray filmed the 1993 motion picture, "Groundhog Day," Woodstock Willie didn’t spot its shadow the way Punxsutawney Phil did. That means Willie, unlike Phil, is calling for an early spring.

"Willie looked skyward to the east and behind to the ground and stated clearly in groundhog-ese, ‘I definitely do not see a shadow,’" Mayor Brian Sager announced to the shivering crowd.

The event, though it included some of the common trappings of the day, starting with the unscrolling of the proclamation and the reading of the news to the crowd, was decidedly unlike in the cinematic version of "Groundhog Day." Willie for the first time appearing on stage with a bunch of people wearing the surgical masks that so many don these days to prevent the spread of COVID-19.

"I am happy we will be able to hold the main event, but with everyone wearing masks I will miss seeing all the smiling faces," Rick Bellairs, chairman of the Woodstock Groundhog Day committee, reportedly said before Willie appeared on stage.

Bellairs also lamented that the event was a streamlined version of the celebration that the community has held for years. The continuous showing of Murray’s movie that put Woodstock on the Groundhog Day map had to be scrapped, as did the chili cookoff, and any events that typically are held indoors.

Bellairs said Tuesday’s appearance by Willie just underlines how different life is since the pandemic began last year. "It’s hard to believe it was just a year ago that Bill Murray was back in Woodstock and Groundhog Day was featured on the Super Bowl."