A Chicago police officer who was shot in the face Monday afternoon in Lincoln Park on the North Side was released from the hospital the same day in the evening, a police spokesperson said.

CHICAGO - A felon on probation who was confronted by Chicago police after threatening and holding a woman at gunpoint told an officer "you will die" after he shot him in the face at a busy Lincoln Park strip mall, Cook County prosecutors said Tuesday.

The officer was shot when he and and another officer tried talking to Jovan McPherson after the woman he was with asked for help Sunday, prosecutors said.

The officer has since been treated and released from Illinois Masonic Medical Center.

Earlier Sunday, the 21-year-old woman McPherson ended up kidnapping picked him up in Elgin so they could run an errand in the city, prosecutors said.

When the woman got a call from the father of her child, 23-year-old McPherson got upset, pulled out a gun and took her cellphone, prosecutors said. He allegedly went on to hold the gun to her side and threatened to kill her as they drove. 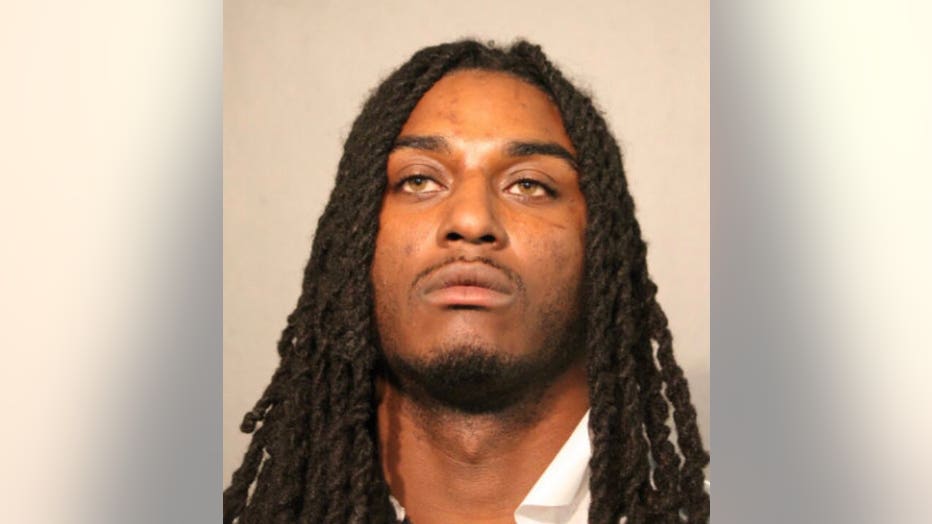 When they drove on Interstate 90/94 toward downtown, McPherson grabbed the wheel and forced the woman to get off the expressway, prosecutors said. The woman went on to drive into a strip mall before she parked and went inside an Ulta Beauty store at 1000 W. North Avenue.

The woman asked a store employee for help when McPherson followed her inside and began to cause a disturbance, prosecutors said.

Meanwhile, another employee was able to get the attention of two officers who were in the mall’s parking lot.

McPherson left the store, but when one of the officers followed him, McPherson pulled the officer’s face mask off, shoved him, put him in a "bear hug" and returned to the store, prosecutors said.

Both officers followed McPherson into the Ulta, trying to calm him down, but he went back outside again and returned to the woman’s car, prosecutors said.

"I got a gun, too," McPherson allegedly told one of the officers as he sat in the car.

When that officer asked where the gun was, McPherson asked if the officer wanted to fight and said "it was a good gun, too," prosecutors said.

Ald. Brian Hopkins (2nd) says "enough is enough" after a police officer was shot in the face Monday in the Lincoln Park neighborhood.

The officer’s body-worn camera recorded McPherson shouting "you will die" after he fired another shot, prosecutors said. The injured officer was not struck by the second bullet. He was eventually able to take the gun away from McPherson as other officers arrived, prosecutors said.

Once in custody, McPherson claimed the officers had fired at him first, but only two shell casings were recovered at the scene and neither officer had fired their weapons, prosecutors said.

An assistant public defender suggested that McPherson may have fired the shot accidentally during the struggle over the weapon.

McPherson was on probation in two separate cases — drug possession and fleeing and eluding arrest — in Kane County at the time of Sunday’s shooting, prosecutors said.

McPherson is unemployed and has lived in Kane County his entire life, his attorney said.

He is expected back in court Nov. 9.