Hundreds of climate change activists were in downtown Chicago Monday to make their voices heard.

CHICAGO - Hundreds of climate change activists were in downtown Chicago Monday to make their voices heard.

Demonstrations were being led by the younger generation who say there is no more time for talk and now is the time for action when it comes to climate change.

The activists were demanding action from local and state leaders.

“Legally I can't hold office. I can’t even vote in the next presidential election. We are begging you, the people in power, the people with power to act,” said Serena Worley.

The activists were calling on Mayor Lori Lightfoot to declare a climate emergency, and they want Gov. JB Pritzker and the Illinois General Assembly to pass the “Clean Energy Jobs Act,” which is legislation that would require all power produced in Illinois to be from renewable sources by the year 2050.

“Illinois has an opportunity to become a leader right now and prove to the rest of the country what a just and sustainable transition to 100 percent renewable energy future looks like,” said Tonisha Harris of Alliance for Climate Education. 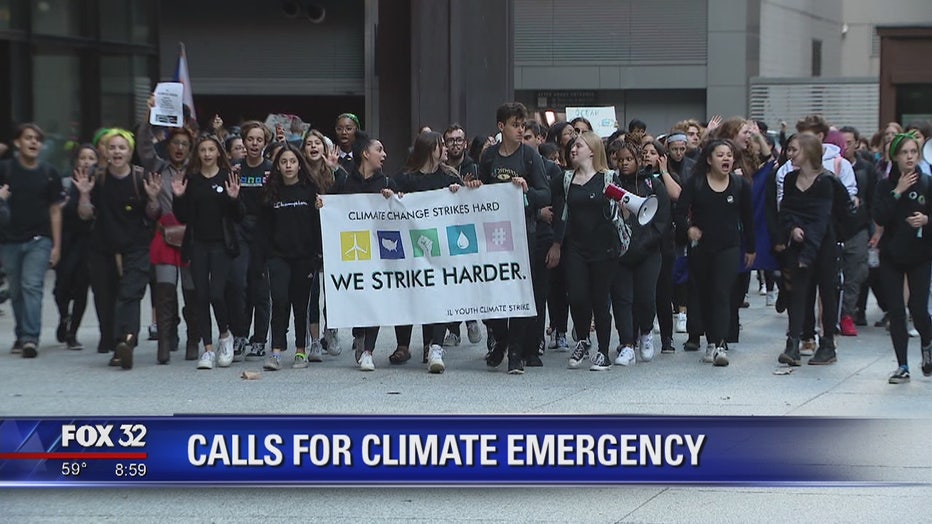 The group marched from Trump Tower to City Hall, eventually blocking traffic at Clark and Randolph. Some demonstrators participated in a “die-in” and laid on the ground for 11 minutes, which the activists said represents 11 years that humanity has left to address climate change before it’s too late.

“I’m younger so if I don’t get this world fixed, then I won't have a world to live in,” said Pilar Rodriguez.

Rodriguez is 12 and joined in on the climate change demonstration with her mom, Olga Bautista.

“Makes me feel very hopeful knowing that there's another generation coming behind us that is also not going to stand for this,” Olga said.

There were climate change protests in more than 60 countries Monday, with people globally demanding action.