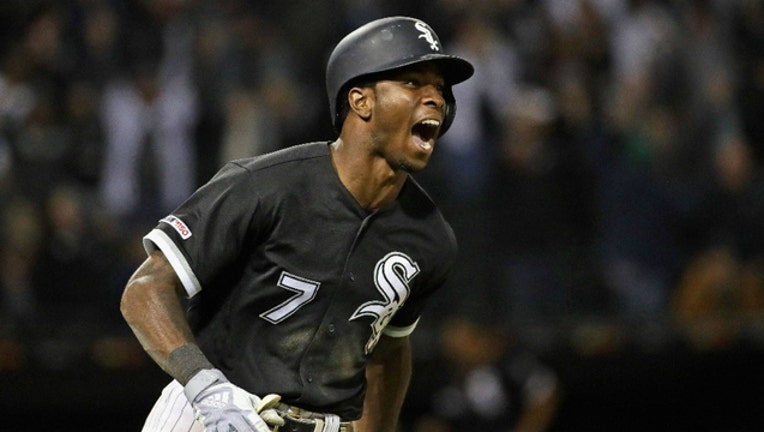 CHICAGO (AP) - Tim Anderson atoned for a baserunning mistake with another memorable moment in what is beginning to look like a breakout season for the young shortstop.

Anderson helped turn José Abreu's three-run homer into a two-run single when he tagged up at first and was passed on the bases, but he went deep in the ninth to give the Chicago White Sox a wild 12-11 victory over the Detroit Tigers on Friday night.

After trailing 9-2 in the fifth, the White Sox closed to 10-9 with a five-run sixth off Zac Reininger that included home runs by José Rondón and Abreu.

With two on and one out in the seventh, Abreu hit a drive off Reed Garrett that just cleared the wall in left-center for an apparent 12-10 lead. But Anderson tagged up at first and Abreu passed him.

Following a video review, Abreu was called out and the lead was reduced to 11-10. Anderson said he didn't expect Abreu to trot by him.

"No I've never seen that that was crazy, it was different," Anderson said. "(Abreu) kind of shocked me. I didn't expect him to be that far but we got the win, so it was good."

Abreu said the blame was on him.

"It was my mistake," Abreu said through a translator. "When I hit the ball I thought it was a regular fly ball to the warning track and I didn't see (Anderson). I take full responsibility for that and I feel bad, but we won the game and that's what matters."

Detroit's Ronny Rodríguez hit a tying home run in the eighth off Kelvin Herrera, and Anderson got Chicago's 21st hit when he connected against Joe Jiménez (1-1) with two down.

Anderson and Abreu each had four hits. Abreu finished with five RBIs.

Alex Colomé (1-0) pitched around a leadoff walk in the ninth for the win.

The Tigers' tired bullpen played a role in the difficult loss.

"There were four (relievers) we really didn't want to touch, so we went with what we had it and it didn't work out," manager Ron Gardenhire said. "The balls were flying and it turned into a circus game, and they ended up on top with another home run."

Yonder Alonso also homered for the White Sox, who got a scare when rookie Eloy Jiménez left in the third inning with a sprained right ankle.

Jiménez, one of baseball's top prospects, got hurt when he jumped into the wall in left while trying to catch Greiner's two-run drive off Carlos Rodón. Jiménez's right foot appeared to get caught in the padding on the wall and he crumpled onto the warning track.

The 22-year-old slugger remained down for a couple minutes, and then walked off the field with a trainer. X-rays were negative, and the team said Jiménez will have an MRI on Saturday.

"I just tried to catch the ball, but when I found out the wall was too close, I tried reach with my foot and it just got twisted," Jiménez said. "Right now (the pain) is a little bit more than normal, but I'm going to be all right."

Santana, a two-time All-Star, went 0-2 with a 9.45 ERA in three starts. The White Sox signed him to a minor league deal in February that called for a $4.3 million salary while in the major leagues.

Tigers: RHP Jordan Zimmermann is expected to be sidelined for up to a month because of a sprained ligament in his pitching elbow. Zimmermann won't be allowed to throw for five to seven days, and then will begin rehabbing. The righty had an MRI in Chicago on Friday that revealed damage to the ligament. ... INF Jordy Mercer (right quadriceps strain) is expected to rejoin the Tigers on Tuesday in Philadelphia.

White Sox: RHP Lucas Giolito, out since April 17 with a left hamstring strain, threw in the bullpen and is expected to return during Chicago's homestand, which ends May 5.