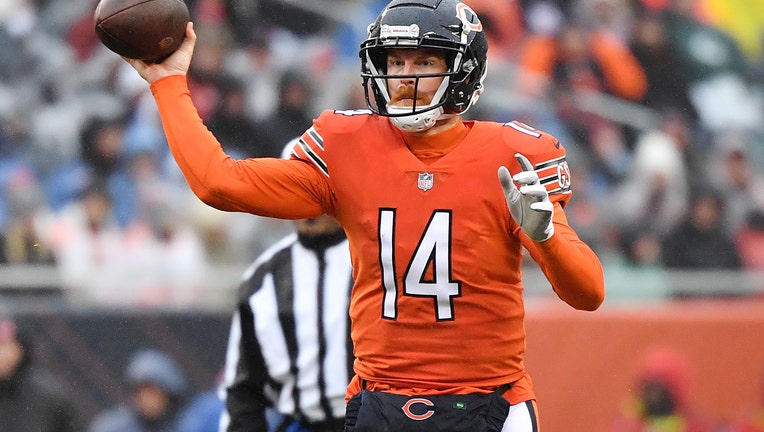 CHICAGO, ILLINOIS - DECEMBER 05: Andy Dalton #14 of the Chicago Bears passes the ball against the Arizona Cardinals in the first half at Soldier Field on December 05, 2021 in Chicago, Illinois. (Photo by Jamie Sabau/Getty Images)

CHICAGO - Quarterback Andy Dalton knew the Chicago Bears had little margin for error going against the team with the NFL's best record.

The Bears weren't even close to playing error-free football as four interceptions set up Arizona for four easy scores, and the NFC West-leading Cardinals emerged with a 33-22 victory on Sunday.

"You can't turn the ball over is what it comes down to," said Dalton, who matched a career high with four interceptions. "We moved the ball really well today at times and we've just got to do that more consistently. We can't give them more opportunities and give them short fields."

The first three interceptions came on passes that deflected off a receiver's hands or a defender's, and the last was a screen pass Dalton took full responsibility for after throwing it directly to defensive lineman Zach Allen.

"The thing that's unfortunate in this league is tipped balls usually don't find the ground," Dalton said. "They usually find the other hands. You saw it three times."

Kyler Murray and the Cardinals (10-2) had to drive only 76 yards for three touchdowns and a field goal after their four takeaways.

"You know, in the end that's what it comes down to is those turnovers, the momentum and the short fields for them against that offense and that team," Bears coach Matt Nagy said. "It's hard to overcome."

The 3rd Ward Toy Drive will run though Dec. 20. More information can be seen on Tailgreeter.com

It wasn't the only thing to go wrong for the Bears (4-8).   Dalton suffered a left hand injury, and the headset in his helmet allowing him to hear Nagy and offensive coordinator Bill Lazor went down for the second straight home game. Nagy was left using a walkie-talkie to communicate with Lazor, who calls the plays.

"They can talk to me, Andy couldn't hear Bill," Nagy said. "Bill was calling the play, I had the walkie-talkie, so Bill was saying the play to me and I was relaying it in to Andy. So, there was a whole little deal that goes on there in those moments.  That's (how) the walkie-talkie saved us because otherwise you're yelling plays like high school."

Chicago Bears coach Matt Nagy denied a report on Tuesday stating he would be fired after the team's Thanksgiving Day game against the Detroit Lions.

The technical issues only compounded problems the Bears had playing in wind, cold and rain against a team accustomed to warm weather and a dome.

Dalton's first pass went off the hand of receiver Jakeem Grant and resulted in Jalen Thompson's interception. The return to the Bears 28 set up Arizona's first touchdown. Grant also had trouble fielding a punt and let it hit and die at the 2-yard line.

"I was definitely cold," Grant said. "Just playing in Miami for five years, it was just a shock to me with 17 mph winds. I was like `oh my God, I don't know how the punt's gonna be. Coach, I don't know.' But I think the weather conditions was definitely a little bit of an effect, just you know, being able to secure the catch and look it all the way through. I think that in games like that we've got to have major focus."

Tight end Cole Kmet had a pass go right off his chest and to Budda Baker, who returned the interception 77 yards to the 15. That set up a TD to give the Cardinals a 14-0 lead. To top it off, Dalton suffered the injury trying to make a tackle on the play.

"I'm going to get it evaluated and see what's going on," Dalton said. "Obviously it didn't affect me. I was able to play the whole game. We'll see how it goes this week."

Dalton, playing due to the broken ribs suffered by starter Justin Fields, finished 26 of 41 for 229 yards with two touchdown passes.

The Bears eventually outgained the Cardinals 329 yards to 257. They got 90 yards rushing and 51 receiving from running back David Montgomery, but it was almost all gained while barely being in the game.

Once they fell behind 21-7 by halftime they were well on their way to their sixth loss in seven games.

"We wanted to try to get the run going and different things, and so I mean it took us a while," Dalton said. "Once we kind of got settled in we were able take it down the field."

The Bears will regroup and possibly face more calls for Nagy's job, like they did after losing their last home game to Baltimore.

"We all are going through a hard time," Montgomery said. "It's not singular. So when coach Nagy signed up for this job, I wasn't here. But I know that when he took this job, he took everything that came with it as well, and that was the players as well. So whatever he feels, we feel too."