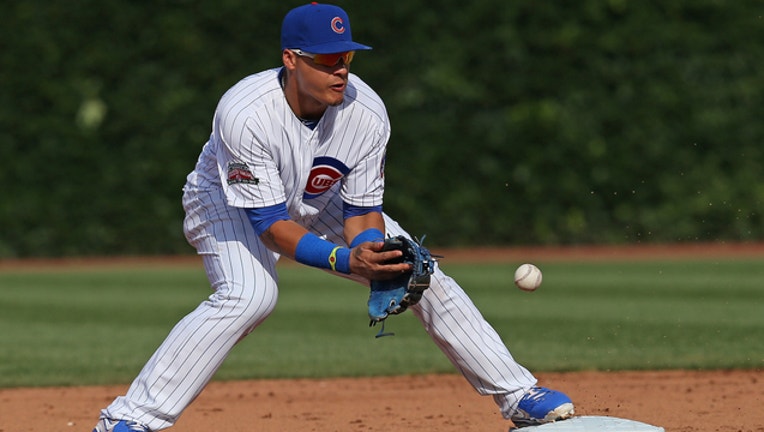 CHICAGO (AP) - After another rough road trip, Javier Báez and the Chicago Cubs came home to Wrigley Field and came out swinging.

Báez homered, doubled twice and drove in three runs, and the Cubs beat the Milwaukee Brewers 6-2 on Friday.

José Quintana pitched solidly into the seventh inning and Jason Heyward also went deep to help Chicago move within one-half game of first-place St. Louis in the NL Central. The third-place Brewers fell 2½ games back of the Cardinals, who have a rare Friday off before starting a two-game series at Oakland.

"We just get here and we relax," said Báez, who scored twice. "We let the game come to us. With the record, when we go on the road, we've got too much pressure to win the game."

Following a 3-6 three-city swing that ended with an 8-0 drubbing at St. Louis on Thursday night, the Cubs seemed energized from the opening pitch for an afternoon game at their iconic ballpark. They improved to 37-18 at home, but are 21-33 away from Chicago's North Side.

"Everybody knows our lineup," Báez said. "Everybody can do damage. We just got to pass the AB to the next guy if you don't get a hit."

Manager Joe Maddon is mystified by his team's road woes, but understands that playing at Wrigley - and a crowd 41,242 on Friday - is a bonus.

"I tell you when you come into this ballpark the energy from the fans is substantial," Maddon said. "You feel it. I think it begins with that."

Quintana (9-7) also singled in a run as he won his fifth straight decision. The left-hander allowed two runs on seven hits and struck out five, and was given a five-run lead en route to beating Milwaukee for the second time in a week.

"I know this lineup and I tried to execute my pitches," Quintana said. "Today just one pitch up, against (Ryan) Braun was homer. After that everything was working."

Braun hit a solo shot and doubled as Milwaukee lost for the fourth time in five games. Zach Davies (8-5) was roughed up for third straight start, allowing four runs in four innings.

"The pitches just had a hard time finding the edges of the plate, which he needs to live on," manager Craig Counsell said. "There were just too many balls in the middle of the plate and falling behind in counts, especially early in the game. He can't pitch like that."

The wind blew in steadily throughout the game. It held up some flyballs, but three made it into the bleachers.

Heyward hit his 16th homer in the first, his first leadoff blast at home since August 2014 with Atlanta.

Braun tied it in the second on his 16th homer.

The Cubs took a 4-1 lead in the third. Báez's team-leading 26th homer, to the basket in left, made it 3-1. Following singles by Willson Contreras and David Bote, Quintana drove in a run with a bloop single.

Contreras and Báez knocked in runs with groundouts in the fifth and sixth.

Cubs utilityman Ben Zobrist, on the on the restricted list since May 8 because of a divorce, was set to start a rehab assignment with Class A South Bend Cubs on Friday night. President of baseball operations Theo Epstein had no return date for the 38-year-old, but said Zobrist would work his way up to Triple-A this month.

Brewers: Manager Craig Counsell said LHP Gio Gonzalez won't have a hard pitch count Saturday after leaving his last start, on July 26 against the Cubs, with tightness in his left shoulder. Gonzalez pitched 6 1/3 innings in that game, allowing two runs on three hits while striking out nine.

Cubs: LHP Cole Hamels is expected to come off the injured list on Saturday and start against the Brewers. The 35-year-old four-time-All Star has been sidelined since suffering a left oblique strain at Cincinnati on June 28.