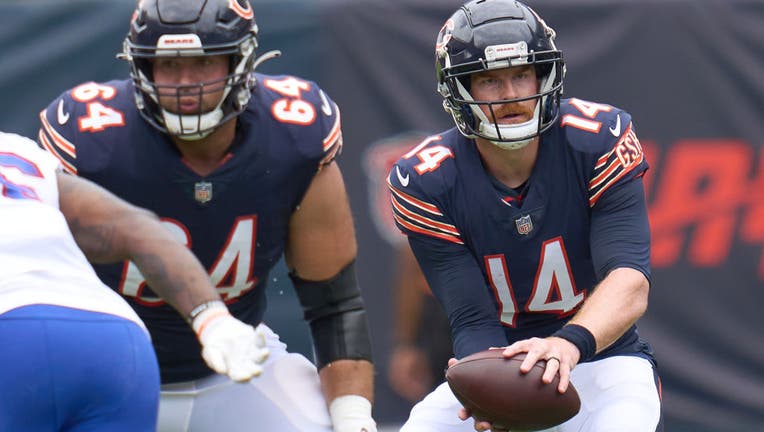 CHICAGO, IL - AUGUST 21: Chicago Bears quarterback Andy Dalton (14) handles the football during a preseason game between the Chicago Bears and the Buffalo Bills on August 21, 2021 at Soldier Field in Chicago, IL. (Photo by Robin Alam/Icon Sportswire

CHICAGO - Chicago Bears general manager Ryan Pace stood by the decision to open the season with veteran Andy Dalton as the starting quarterback.

He sees no reason to rush Justin Fields.

The plan is to have the team’s prized rookie watch and learn from the sideline. And Pace is standing by it.

"I just feel we’re just in a good position with Andy," he said Wednesday. "It starts with how we feel about Andy. And we’re very confident in him and where he’s at. So there’s no need for us to rush Justin."

The Bears have said Dalton is their starting quarterback since they signed the three-time Pro Bowler to a one-year, $10 million contract. That didn’t change when they traded up nine spots with the New York Giants to draft Fields with the No. 11 overall pick.

The big move to land the former Ohio State star gave fans hope that the Bears might finally have a franchise quarterback. The organization is banking on it after whiffing on Mitchell Trubisky, the No. 2 pick in 2017.

Fields showed promise in the preseason with his arm, speed and poise. But the Bears decided it’s best to have him backing up for now rather than thrust him into the starting role.

So it will be Dalton, the longtime Cincinnati Bengals quarterback, behind center when the Bears visit the Los Angeles Rams on Sept. 12.

That could change if the team struggles.

Chairman George McCaskey opted to stick with Pace and coach Matt Nagy after the Bears went 8-8 in the regular season for the second year in a row. Though they made the playoffs, they did it as the seventh seed in an expanded field. Chicago then lost a wild-card game at New Orleans in convincing fashion.

If the Bears struggle in the early going, the heat on Pace and Nagy figures to intensify. The calls for Fields will only get louder, too.

So far, Pace said, Fields has performed exactly the way the Bears hoped.

"We obviously knew about the arm talent, the athleticism, the work ethic, all of those things," Pace said. "But when you get him out there in an NFL environment, he stays calm in the moment. I think his heart rate stays low, he processes fast. He goes through progressions."

"Andy’s our starter and we’re rolling with that," Pace said.

The quarterback spot wasn’t the only issue he addressed.

Trevathan missed two weeks of training camp. He started the final preseason game, but didn’t stay in long. Pace said the Bears want to "make sure he’s 100% before we put him out there."

Jenkins, a second-round pick from Oklahoma State, is recovering from surgery after experiencing pain in his leg at the start of camp. He also missed his final three college games because of a lumbar issue, but Pace said the symptoms were different this time.

"The good thing about it?" Pace said. "As soon as we did (the surgery), those symptoms went away. So we feel good about it."

Pace confirmed the Bears are in the process of signing Breshad Perriman, adding depth at receiver.

Perriman had 30 receptions for 505 yards and three touchdowns with the New York Jets last season, his fifth in the NFL. He agreed to a one-year, $3 million contract with Detroit in March and was released by the Lions for a lack of production in the preseason.

The Bears claimed return specialist Nsimba Webster off waivers from San Francisco. The 49ers claimed him in July from the Rams after he played his first two seasons in Los Angeles.