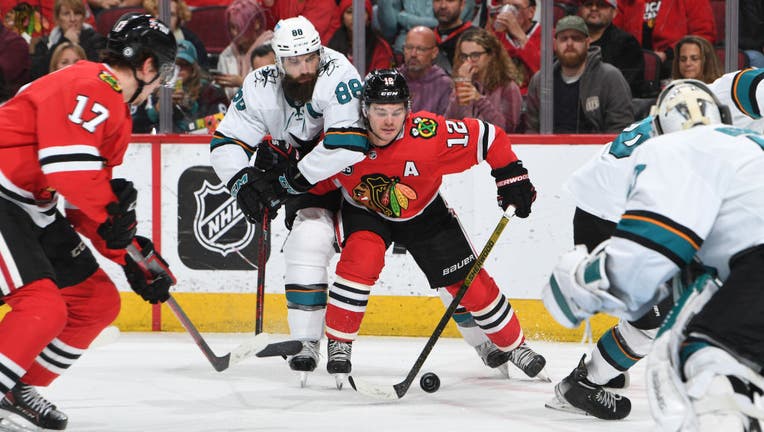 Brent Burns #88 of the San Jose Sharks and Alex DeBrincat #12 of the Chicago Blackhawks battle for the puck in the third period at United Center on April 14, 2022 in Chicago, Illinois. (Photo by Bill Smith/NHLI via Getty Images)

CHICAGO - Alex DeBrincat scored the lone goal in the shootout after having three assists in regulation and the Chicago Blackhawks snapped an eight-game losing streak with a 5-4 win over the San Jose Sharks on Thursday night.

DeBrincat beat James Reimer with an in-tight move in the third round of the shootout. Chicago’s Kevin Lankinen followed by stopping Erik Karlsson’s slap shot from the slot as Chicago ended an 0-6-2 slide.

Patrick Kane scored his 24th goal and added two assists for Chicago. Dylan Strome notched his career-high 21st goal and had an assist, and Taylor Raddysh and Calvin de Haan scored. Seth Jones had two assists. The Blackhawks’ losing streak was their second longest this season after they went 0-7-2 in their first nine games.

"Obviously it changes the vibe in the room a little bit after you win the game," Kane said. "We put together a better performance than we had lately. It felt like a game that meant something tonight.

"I thought we played well for most of the game. A couple breakdowns, turnovers, mistakes and they capitalized."

Chicago scuffled in the final minutes of regulation as San Jose came back from a 4-2 deficit.

Jaycob Megna scored on a rebound from a flurry in front with 3:25 left in the third to tie it at 4 and send it to overtime. Megna connected with Lankinen sprawled on the ice after he stopped Timo Meier’s shot.

"They stayed with it," Chicago interim coach Derek King said. "We made some young mistakes, but Lanks played well.

"I liked the effort. Win or lose, that was the biggest. It’s more or less for the guys. They can hold their head a little higher walking out of the building tonight."

Meier scored his team-leading 32nd goal for the Sharks, who have lost eight in a row (0-5-3). Scott Reedy and Rudolfs Balcers also scored for San Jose, which got two assists from Tomas Hertl.

"I’m proud of the way we fought back when we were down 4-2," captain Logan Couture said. "We had lost seven in a row at the point. It would have been easy to pack it in."

San Jose was hit hard by injuries to key players and struggled to score.

"The biggest issue for us was losing our best offensive players on a team that already was starving for goals," coach Bob Boughner said. "We battled. We played hard. We just couldn’t stay healthy."

Kane opened the scoring 1:18 into the first when he lifted in a shot from the left circle to complete a 3-on-1 break with Strome and DeBrincat.

Meier tied it at 1 at 4:45. He fired into an open net from the left circle after Brent Burns’ shot from the right point deflected to him off the post.

Raddysh’s power-play goal at 13:35 of the second put Chicago ahead 2-1. Jones slid a shot that caromed in off Raddysh’s skate as he drove to the crease.

Reedy tied it 2 just over two minutes later when his shot from the slot ticked off de Haan’s skate.

Strome gave the Blackhawks a two-goal lead at 4:07 of the third, converting Jones’ cross-ice feed to complete a pretty passing sequence.

Balcers made it a one-goal game again just 1:33 later by converting a loose rebound with Lankinen down.

Jordan Samuels-Thomas made his debut as an NHL referee and became the first NHL’s first Black ref since Jay Sharrers worked a game between the Islanders and Hurricanes on April 2, 2004.

A 31-year-old native of West Hartford, Connecticut, Samuels-Thomas, was an NCAA and minor-league forward, and drafted by the Atlanta Thrashers in 2009.

Linesman Shandor Alphonso, who is Black, also worked the game.

Pat Foley, a Blackhawks play-by-play broadcaster for 39 seasons, called his final game Thursday. A member of the Hockey Hall of Fame, the 69-year-old Foley worked the telecast alongside analyst Ed Olczyk, his broadcast partner since 2008.

Fans chanted Foley’s name during a pregame ceremony on the ice and the team played video highlights of the suburban Chicago native’s career during the contest. Chris Vosters will take over as the team’s TV play-by-play voice next year.

NOTES: Meier ended a five-game goal drought. His scored his 31st to set a career high on March 31 against Colorado. ... Among Chicago’s five healthy scratches was slumping F Dominik Kubalik, who sat out his third straight. Kubalik has just one goal in his last 15 games and two in 27.

Sharks: At Dallas on Saturday.

Blackhawks: At Nashville on Saturday.