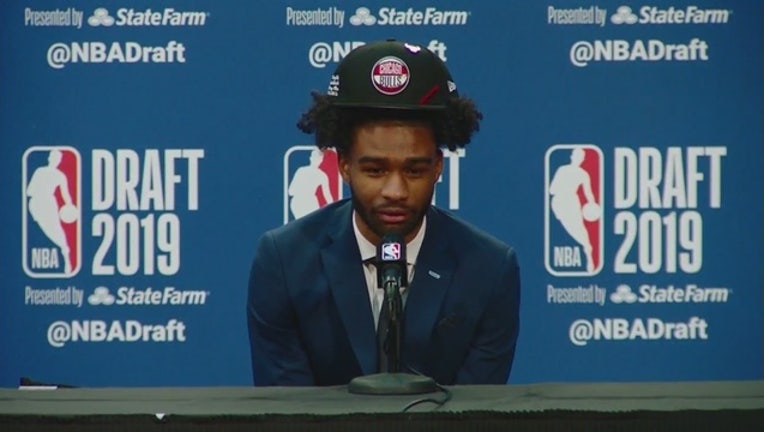 CHICAGO (AP) - The Chicago Bulls were looking for an upgrade at point guard, and they are banking on North Carolina's Coby White to give them the backcourt boost they are seeking.

The Bulls drafted White with the No. 7 overall pick on Thursday night, hoping he can solidify the position after Kris Dunn took a step back last season.

Executive vice president of basketball operations John Paxson said Chicago was looking to improve the point guard spot after Dunn struggled through an injury-riddled third season. The Bulls backed that up by drafting the dynamic White, whose wild hairdo is as impressive as his game.

He and Dunn are represented by the same agent. Now, White will be trying to take his spot.

"I've been competing all my life," White said. "When I got to Carolina, I had to compete for a starting spot. I had to compete for the point guard spot. Competing, it's in my blood. It's in my DNA. We're gonna go at it for sure. Kris Dunn's a great player. But I can't wait to get there and get to work."

The Bulls missed the playoffs for the third time in four years and finished with one of the worst records in franchise history at 22-60 last season. They got hit hard by injuries in the second season of their rebuild, fired coach Fred Hoiberg after a 5-19 start and went 17-41 the rest of the way under Jim Boylen.

The 6-foot-5 White was a McDonald's All-American in high school and helped North Carolina reach the Sweet 16 in his lone college season, averaging 16.1 points and 4.1 assists in 35 games. He is the first Tar Heel drafted in the opening round by the Bulls since they took Michael Jordan with the No. 3 pick in 1984.

"It feels great for sure," he said. "Michael Jordan was the best player to ever do it. Yeah, I'm definitely blessed."

The Bulls also took Arkansas big man Daniel Gafford in the second round with the 38th overall pick. The 6-foot-11 Gafford was first-team, all-SEC as a sophomore last season, averaging 16.9 points, 8.7 rebounds, and 2 blocks.

White actually finished with more points (562) as a freshman than "His Airness" (460 over 34 games) did in 1981-82. Jordan, of course, led Chicago to two championship three-peats in the 1990s and has a bronze statue in the atrium at the United Center.

The Bulls would settle for White simply fixing a position that has been an issue since Derrick Rose was in his prime.

"When you start digging into the draft, you start looking at the individual and what he can do for your organization," Paxson said. "We feel he's just a really good fit for us."

Paxson insisted the Bulls have not given up on Dunn and value him "very much."

White, a North Carolina native, is a fast player who is effective with the ball and playing off it. He can push the pace and score off the screen.  One area White said he needs to improve is his ability to change speeds. But he believes he is ready for the NBA.

It hasn't been an easy road.

White's father Donald died two years ago of liver cancer. And he was certainly in his son's thoughts on Thursday.

"He'd be telling me how proud he was for me and how he loved me," White said. "He'd just tell me ... I've got a lot of success coming my way. I've got to continue to stay on the right path, continue to be myself, stay true to myself, never forget where I came from. And continue to work like I have been all my life."

The Bulls believe they have the makings of a winning core with White joining Lauri Markkanen, LaVine, Wendell Carter Jr. and Otto Porter Jr. And they saw enough progress after promoting Boylen from assistant coach to give him a contract extension in May.

This was the third straight year Chicago got the No. 7 pick. And if White produces the way Markkanen and Carter have, the Bulls would take that.

The 7-foot Markkanen has averaged 16.7 points and 8.2 rebounds since the Bulls acquired his rights along with LaVine and Dunn from Minnesota in the 2017 draft night trade with Minnesota that launched the rebuild. The 6-10 Carter showed promise last season, averaging 10.3 points and 7 rebounds in 44 games before a season-ending left thumb injury.

"We feel we've made a significant jump," Paxson said. "Now, it's up to our players to, obviously, get better."

The Bulls figure to have about $20 million in salary cap room and could look to add veteran help.

White visited the Bulls on Saturday, though he did not work out for them. He came away particularly impressed with Boylen.

"He's my type of coach, straightforward," White said. "He's very hands on, which I loved. He studied my game, showed me film on the whiteboard, showed me everything I can work on and everything that's gonna translate. I loved him. ... It was the best individual meeting I had with a coach."