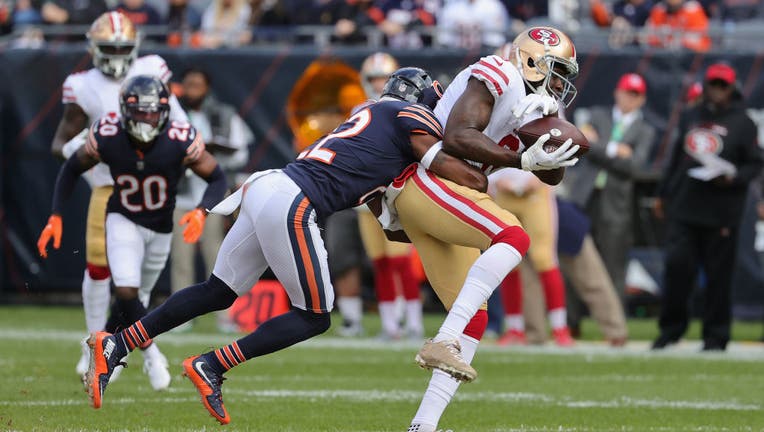 CHICAGO, ILLINOIS - OCTOBER 31: Mohamed Sanu Sr. #6 of the San Francisco 49ers makes a catch while being guarded by Kindle Vildor #22 of the Chicago Bears in the first quarter at Soldier Field on October 31, 2021 in Chicago, Illinois. (Photo by Jonat

LAKE FOREST, Ill. - Statistics say the Chicago Bears’ defense has held its own throughout a series of injuries.

The wins, losses and end of games say something else about defensive coordinator Sean Desai’s group as they try to determine the best way to end a four-game losing streak Sunday against Lamar Jackson and the Baltimore Ravens.

It’s questionable at 3-6 what hunt the Bears are in, but if their defense had played at its former levels they could have come out with wins in their past two games.

They’re still 12th overall on defense and 10th defending the pass, but fading late in games has become a trend. They did so in each of the four defeats in their losing streak.

Numbers are deceiving because they allowed a late Pittsburgh field goal drive for a loss and a series of big San Francisco plays after they’d led 16-9 in a 33-22 loss.

"There were some big outliers there, especially in particular that San Francisco game, where, boy they were really running the ball well against us and had some long drives and yards per rush attempt was high," Bears coach Matt Nagy said. "But for the most part, I really have thought that for most of the season we’ve done a good job at being able to stop the run until a few outlier games."

Ranked fifth after two weeks at stopping the run, the Bears have slid to 23rd and have given up 586 rushing yards the past four games.

Injuries to outside linebacker Khalil Mack (foot), defensive end Akiem Hicks (ankle) and safety Eddie Jackson (hamstring) have deprived them of three of their best playmakers. Jackson returned to practice Thursday on a limited basis; the other two remain sidelined, and Mack hasn’t played since Oct. 24.

"Obviously, we’ve had some injuries, we been having some injuries, things like that," safety Tashaun Gipson said. "That’s never an excuse because obviously everybody on this team is capable of playing, but that’s the tough part about it because we have ball-aware guys. We have guys who can make those plays, man, and those plays are just not coming."

The Bears had stressed forcing more turnovers coming into the season, and had three interceptions of Joe Burrow on successive plays from scrimmage against Cincinnati in Week 2.

They had seven takeaways in the first five games and have only two in their past four games.

"It’s tough, it’s tough," Gipson said. "I think that’s one of the things since I been here is it’s tough getting those takeaways. The season started off the way that we wanted as far as just like being able to get takeaways, whether it’s strip sacks, whether it’s interceptions, just takeaways period, man. That’s kind of fizzled down."

They haven’t had an interception since DeAndre Houston-Carson’s pick against Las Vegas in Week 5. The two turnovers they’ve benefited from since were fumbles, one a special teams play and the other a goal-line fumble by Tampa Bay in a blowout loss.