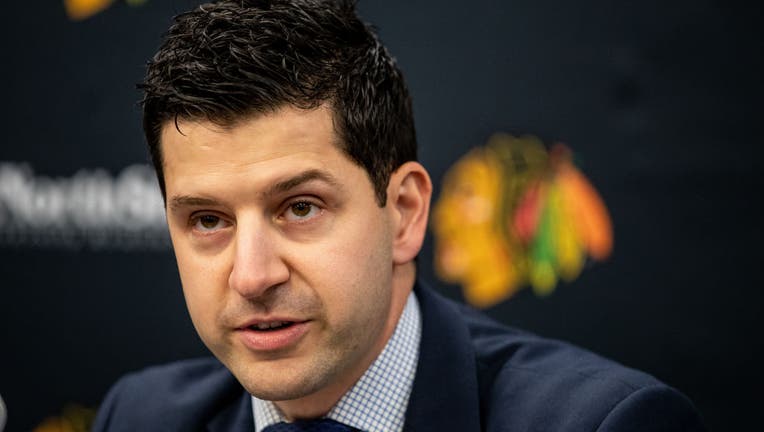 CHICAGO - The Chicago Blackhawks hired Kyle Davidson as general manager on Tuesday, dropping his interim tag instead of going outside the floundering franchise for new leadership.

Davidson has been with the Blackhawks since he joined the organization as a hockey operations intern in 2010. The 33-year-old from Ottawa, Ontario, also has worked as a video analyst, hockey operations manager and assistant GM.

Davidson was elevated to the interim job after longtime general manager Stan Bowman resigned in October in the wake of a report by an outside law firm that found the organization mishandled allegations that an assistant coach sexually assaulted a player during the team’s Stanley Cup run in 2010.

The report also played a role in the departure of Al MacIsaac, another of Chicago’s top hockey executives, and the NHL fined the team $2 million for "the organization’s inadequate internal procedures and insufficient and untimely response."

Two lawsuits related to Kyle Beach’s allegations that he was assaulted by then-video coach Brad Aldrich in 2010 were resolved in December.

Davidson made his first big move on Nov. 6, firing coach Jeremy Colliton and giving Derek King the job on an interim basis. He likely will wait until after the season to make any announcement on King's status.

Chicago (19-27-8) began this year with playoff aspirations, but it dropped its first nine games and never recovered. It has made just one postseason appearance over the past five years.

The next big task for Davidson is making the most of the March 21 trade deadline. The Blackhawks traded their 2022 first-round pick to Columbus in the Seth Jones deal in July, and they would love to recoup that lost draft capital.

Goaltender Marc-Andre Fleury, defenseman Calvin de Haan and forwards Dylan Strome and Dominik Kubalik are among the Blackhawks who could be on the move.