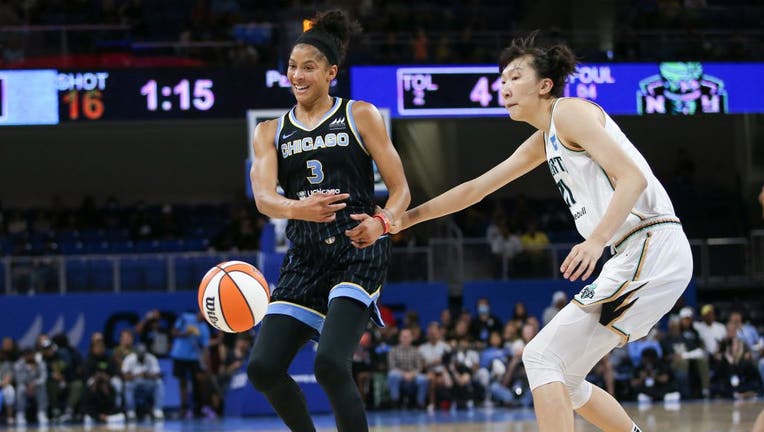 Chicago Sky forward Candace Parker (3) passes the ball in action during the second half in game 2 of a WNBA first round playoff game between the New York Liberty and the Chicago Sky on August 20, 2022, at Wintrust Arena in Chicago, IL. (Photo by Meli

The teams will play on Tuesday in New York with a trip to the WNBA semifinals at stake.

Candace Parker added 12 points, 12 rebounds and four assists for the Sky, who broke their own WNBA record for largest margin of victory in the playoffs. Chicago won by 36 at home in Game 3 of the Finals last year.

The defending champion Sky took it right at New York behind Copper, who scored the team’s first five points. She suffered a reported ankle injury toward the end of practice Friday and had to be helped off the court. Chicago coach James Wade said last year’s WNBA Finals MVP would be fine.

Cooper opened the scoring with a 3-pointer and then drove hard to the basket. She was also disruptive on defensive, forcing New York into turnovers. The Liberty only had eight miscues in the first game. But they matched that total by the end of the first quarter, with Chicago ahead 31-10. Copper had 10 points in the first quarter.

Chicago extended the advantage in the second quarter to 31, playing relentless defense and cruising to a 52-28 halftime lead. New York could get no closer in the second half as the Sky kept it going offensively and defensively.