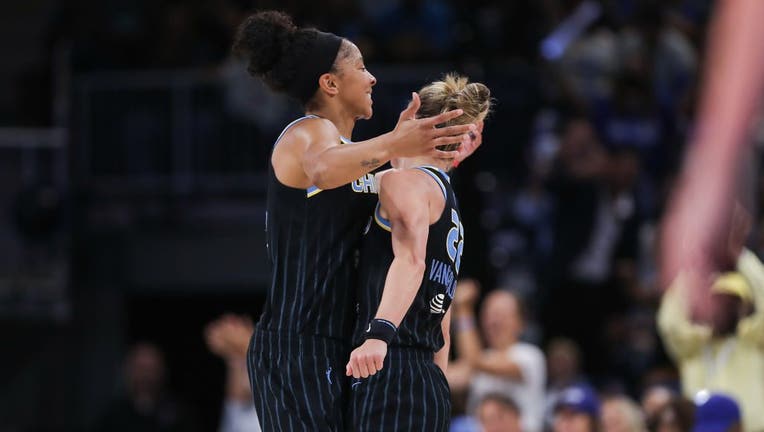 Chicago Sky forward Candace Parker (3) and Chicago Sky guard Courtney Vandersloot (22) celebrate during a time out during the second half in game 2 of a WNBA first round playoff game between the New York Liberty and the Chicago Sky on August 20, 2022

NEW YORK - Candace Parker had 14 points, 13 rebounds and eight assists to lead the Chicago Sky over the New York Liberty 90-72 Tuesday night in the deciding Game 3 to advance to the WNBA semifinals.

The defending champion Sky await the winner of the Connecticut-Dallas playoff series that will have its deciding Game 3 on Wednesday.

The seventh-seed Liberty shocked the Sky by taking Game 1. Chicago routed New York by a WNBA playoffs record 38 points in the second game, racing out to a 31-10 lead by the end of the first quarter and never looking back.

"We knew what we had to do. They were all on a mission and you could tell it was a collective mission," Chicago coach James Wade said. "We decided it was go time and show what we were made of and responded in Game 2 and built on it after that."

This one was a lot more competitive. Chicago led 25-20 after one and extended the advantage to 54-42 at the half as Parker had seven points, six assists and seven rebounds in the opening 20 minutes.

New York scored the first seven points of the fourth quarter, including a five-point possession by Sabrina Ionescu to get within 68-65 that brought the sold out lower bowl of Barclays Center to its feet.

This was New York’s first home playoff game since 2017 when the Liberty lost in the second round to Washington. New York hadn’t made the semifinals since 2015.

That euphoria didn’t last long though as Chicago scored the next 16 points, including consecutive 3-pointers by Quigley to end the run and put the game away with just over 4 minutes left.

Betnijah Laney scored 15 points and Ionescu and Natasha Howard each had 14 for the Liberty.

"(Chicago) is a really good team, see the chemistry the have," New York coach Sandy Brondello said. "They have poise and they made plays and we couldn’t. We rushed a few shots when they made some plays. Proud of these girls, proud of this team. The more experienced team won tonight."

Parker fell just short of the fourth triple-double in WNBA playoff history. She was looking to join Vandersloot, Lisa Leslie and Margo Dydek.

Chicago Sky coach and general manager James Wade was chosen as the WNBA Executive of the Year on Monday. The voting panel is made up of one basketball executive from each WNBA team, with each representative submitting top three choices. Wade won by being named on the most ballots (11).