CHICAGO - The Phoenix Mercury acquired Diamond DeShields from the Chicago Sky as part of a three-team deal Thursday that also sent Bria Hartley to the Indiana Fever.

Indiana received the seventh pick in the draft from Chicago this year and the Sky’s first-round choice next year. Chicago got Julia Allemand from Indiana as well as Phoenix’s first-round pick next season.

DeShields helped the Sky win the WNBA championship last year and has averaged 13.2 points and 4.3 rebounds in her career.

"Diamond DeShields is as dynamic an athlete as we have in our league and at just 26 years old has already been a champion, an All-Star and an All-WNBA performer," Mercury GM Jim Pitman said. "She was one of our top targets this offseason because of her ability to score and defend from the wing position and how dangerous she is in the open floor. We are thrilled to add Diamond to our All-Star core." 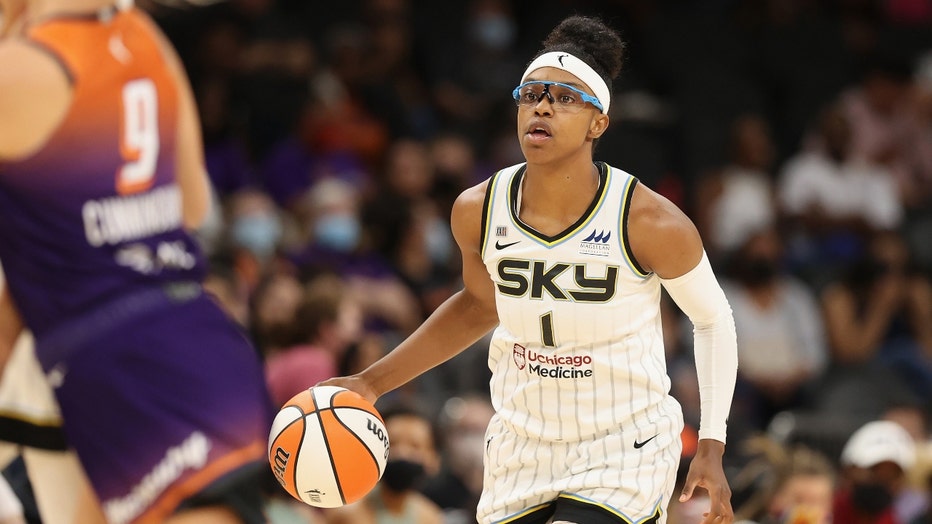 Diamond DeShields of the Chicago Sky handles the ball against the Phoenix Mercury during the first half of the WNBA game at the Footprint Center on August 31, 2021 in Phoenix, Arizona. (Christian Petersen/Getty Images / Getty Images)

Allemand skipped last season to help the Belgium national team prepare for the Olympics. She was originally drafted by Indiana with the 33rd overall pick in the 2016 WNBA, but didn’t start playing for the Fever until the 2020 season.

She finished that season ranked second in assists in the league.