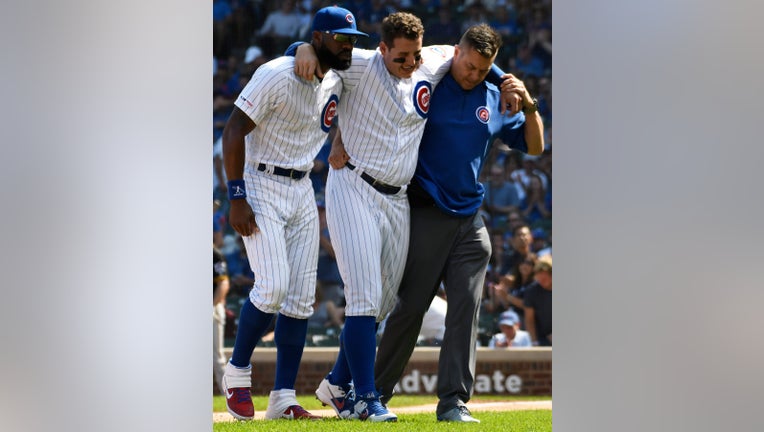 CHICAGO, ILLINOIS - SEPTEMBER 15: Anthony Rizzo (center) of the Chicago Cubs is helped off the field by Jason Heyward (left) and trainer PJ Mainville after being injured against the Pittsburgh Pirates during the third inning at Wrigley Field on Septe

CHICAGO - Anthony Rizzo was helped off the field Sunday by a trainer and a teammate with a sprained right ankle, and Wrigley Field fell silent. With Chicago's postseason pursuit already hindered by a season-ending injury to shortstop Javier Báez, the team may now be without another star player.

For one day at least, the Cubs rallied without those lineup staples, thumping the Pittsburgh Pirates 16-6 to finish an impressive three-game sweep.

Rizzo was injured fielding a bunt at first base in the third inning. X-rays showed no fractures, and an MRI has been scheduled for Monday.

"We're gonna miss Riz, we already miss Javy, but I really believe the rest of the group is up to the task," manager Joe Maddon said.

The Cubs maintained their one-game lead over Milwaukee for the second NL wild card. The Nationals are 1 1/2 games ahead of Chicago for the first wild card.

Kris Bryant homered twice, and Ian Happ, Kyle Schwarber and Jonathan Lucroy also connected as Chicago battered Pittsburgh for a third straight day. The Cubs scored a total of 47 runs on 49 hits in completing the sweep.

Maddon is hoping the performance is a preview of the final two weeks of the regular season.

"There's galvanizing moments, too," he said. "When your better guys go down like that, the other guys realize, 'Hey, let's go.' That's part of the mindset, too. You can't permit that to drag you down. We didn't."

After Erik Gonzalez's leadoff double, Pirates starter Trevor Williams bunted toward third base. Rizzo charged aggressively from first and rolled his ankle a few steps before fielding the ball. He threw wide to first base and dropped to the ground in pain.

Brad Wieck (1-1) later replaced Quintana with two on and struck out both batters he faced to end the inning.

"It really did kind of get away from us in a sense," Bryant said. "The fans were upset, we were upset. It was kind of like a light switch. He's a great dude, a great teammate and any time you see that happen, it's tough.

"But I think we responded well. Guys stepped up and we scored a ton of runs in a really important game."

The Cubs rallied for five runs in the bottom of the inning to lead 8-5, starting with Bryant's second homer of the game and ending when reliever Michael Feliz threw wildly on an appeal play at third base.

Bryant gave the Cubs an early lead with a three-run blast in the first.

Bryant now has 138 career homers, the most by any Cubs player in his first five seasons in the majors. Ernie Banks had the previous record with 136.

The Cubs' runs were the most they've scored in a three-game series since tallying 48 (also against the Pirates) in July 1894.

Pirates: 1B Josh Bell (groin strain) missed his second straight game. He is listed as day-to-day after exiting in the fifth inning on Friday. ... OF Starling Marte (left wrist sprain) didn't start for the seventh straight game.

Cubs: Closer Craig Kimbrel (right elbow inflammation) threw 20 pitches in a bullpen session before the game. He reported no issues, but the team will see how he feels Monday before deciding on the next step. ... INF Addison Russell was placed on the seven-day concussion list Sunday retroactive to Thursday. He was hit in the head by a pitch last Sunday at Milwaukee.