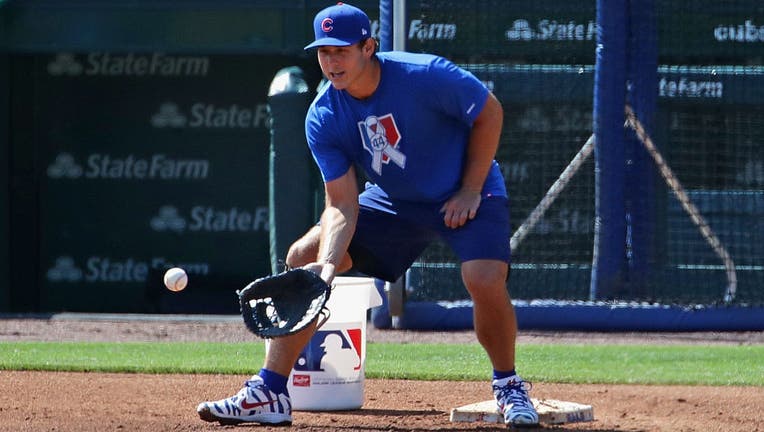 CHICAGO - Anthony Rizzo was ready to go. The slugging first baseman for the Chicago Cubs showed up to summer camp in great shape, looking forward to the season.

Then a familiar problem surfaced again.

Rizzo is tracking pitches and doing strength and stability exercises while he waits for his ailing back to calm down. An MRI on Tuesday showed rib-head inflammation on his left side that is causing spasms — a condition he has dealt with before in his career.

“Frustrating, just because how physically in shape I felt like I was coming in,” Rizzo said Wednesday. “Just can’t control the flareups. The MRI getting kind of what we knew, just confirming it. Just kind of getting it to calm down and get back out there as fast as I can.”

Rizzo, who turns 31 next month, tested his back when he took live batting practice on Sunday, But it didn’t respond very well to the session.

The Cubs open the season on July 24 against Milwaukee, and any prolonged absence for Rizzo would be a big blow for the team. The three-time All-Star finished with at least 25 homers and 101 RBIs for four consecutive years from 2015-18. He hit .293 with 27 homers and 94 RBIs last season.

“I want him to be healthy and 100%,” manager David Ross said. “I think the good news is he understands where he’s at with this back thing he’s got going on and dealing with it in the past. He doesn’t seem worried. I think the main thing is that we’re progressing in the right direction. He still has a positive outlook so that makes me have a positive outlook.”

Rizzo is considered day to day, and Ross said it’s still early to talk about him beginning the 60-game season on the injured list. Kris Bryant and Victor Caratini are the top choices to fill in at first if Rizzo is unavailable at the beginning of the year.

Rizzo said he doesn’t think he will need to begin the year on the IL.

“You just play the risk-reward right now,” he said. “We know how important every game is, so for me personally I’m going to be pushing to get back as fast as I can and take the risk because the reward of being with the guys and playing alongside of them is worth it for me.”

In addition to Rizzo’s back trouble, the Cubs were missing six players Wednesday who were awaiting completed coronavirus test results from Monday. Robel Garcia, Christopher Morel, Brennen Davis and Miguel Amaya came over from the team’s camp in South Bend, Indiana, for an intrasquad game at Wrigley Field.

“This is not easy — I think I’ve said that a million times — it’s not easy on the players, it’s not easy on Major League Baseball,” Ross told reporters. “I don’t think it’s anybody’s fault that things are delayed.”