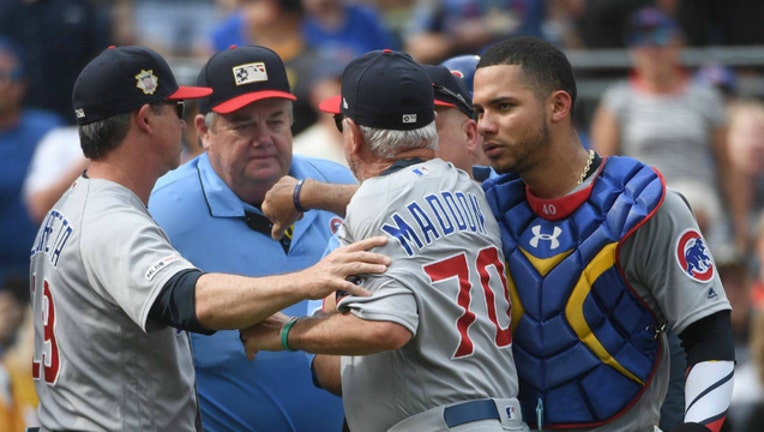 PITTSBURGH - Joe Maddon isn't against pitching inside. It's when the ball starts buzzing batter's heads that the Chicago Cubs manager thinks the increasingly thin line between aggressive and dangerous can get a little too blurry.

On Thursday, Maddon thought Pittsburgh starter Jordan Lyles crossed it. So Maddon stormed onto the field after All-Star shortstop Javy Báez twice had to lean out of the way of inside pitches during his fourth-inning at-bat against Lyles.

Maddon walked toward the Pittsburgh dugout before being restrained by plate umpire Joe West and Chicago star Kris Bryant, at one point unleashing a pretty spry spin move for a 65-year-old former high school football player in an effort to get away.

While the outburst earned Maddon his second ejection of the season, it also provided a spark in what became an 11-3 victory that snapped a four-game losing streak.

"Pent up frustration is one thing, but when guys keep throwing at their head, that's another thing, too," Maddon said.

Lyles (5-5) didn't hit a batter during his four-plus innings of work. Reliever Clay Holmes did, drilling third baseman David Bote in the head with the bases loaded in the fifth. Bote remained in the game after being checked out by the training staff and insisted he was fine.

Maybe, but Maddon is just about over watching his players bailing out to get out of the way of a Pirate's wayward pitch. Pittsburgh began the day having hit 39 batters on the season, seventh-highest in the majors. The Cubs have hit 31 batters so far.

"When you can't command the ball in, which was evidenced by David getting hit in the head (it's out of hand)," Maddon said. "I'm just saying, they continue along that tack, they got a nice bunch of players right there. They're not going to like it."

Lyles shook off the criticism, pointing out going inside is part of his typical gameplan.

"I throw a lot of heaters up at hitters' hands," Lyles said. "And then I think it was the foul ball which created Joe to come out. But other than that, Báez said he was good. Everything was fine. Maybe he was trying to get the boys to get a little light up in them."

Maddon's theatrics came with the Cubs nursing a slim one-run lead. An inning after Maddon headed to the clubhouse - where the manager said he enjoyed a nice glass of red wine - Chicago broke it open during a five-run fifth that included a two-run single by Báez.

Bryant tied a season high with four hits, including a first-inning home run to the seats in right-center off Lyles.

Bryant had no issue with Maddon briefly losing his cool.

"It's kind of like, all right, if you want to pitch up, just pitch up," Bryant said. "Don't go in. We shouldn't be getting hit on the head. I don't think it was on purpose or anything like that, but it's just frustrating when balls keep coming right in front of your face."

Robel Garcia finished a double short of the cycle in his first major league start. Willson Contreras drove in three runs for the Cubs, who moved back into a tie with Milwaukee for first place in the crowded NL Central, where all five teams are separated by 3 1/2 games.

Kevin Newman had two hits and All-Star Josh Bell boosted his RBI total to a major league-leading 81 with a sacrifice fly, but the Pirates couldn't pull off a four-game home sweep of the Cubs. Lyles surrendered a season-high seven runs and 10 hits, eight of them for extra bases, as Pittsburgh missed out on a chance to get back to .500 for the first time since May 31.

The Cubs have been in a weekslong funk and fell to 8-15 in their last 23 games after a 6-5 loss Wednesday night in which the Pirates rallied for two runs in the ninth against recently signed closer Craig Kimbrel. Maddon called it perhaps the toughest loss his team has endured all season but said his club's issues could be easily solved with just a little offense.

Chicago responded by putting up its highest run total since a 14-6 win over Washington on May 17. And the Cubs open the second half by welcoming the Pirates to Wrigley Field next Friday, a meeting Maddon said he "can't wait" for.

"I just want to see us go out there with the kind of intensity we played the last two games with and I'll take whatever happens after that," he said.

Cubs: RF Jason Heyward was held out of the lineup for a second straight day due to back tightness.

Pirates: RHP Keone Kela (right shoulder inflammation) threw 29 pitches in the bullpen on Wednesday without any ill effects and is scheduled to throw a simulated game Saturday.

Cubs: Get a rare Friday off before beginning a two-game series against the crosstown White Sox on Saturday. Jon Lester (7-6, 3.89 ERA) starts the opener against Lucas Giolito (11-2, 2.72 ERA).