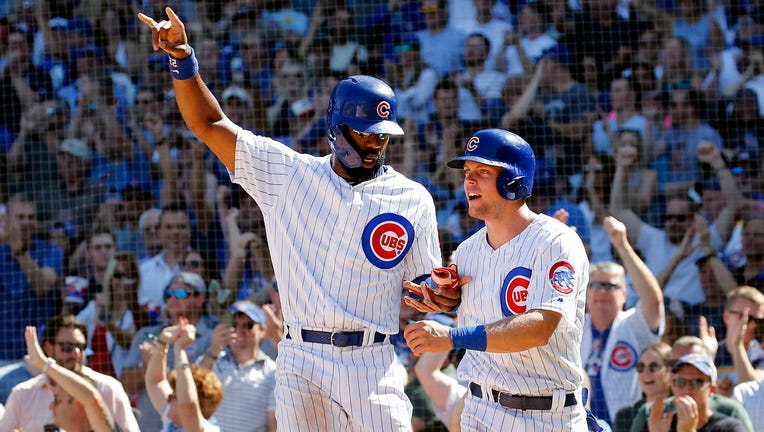 Jason Heyward #22 and Nico Hoerner #2 of the Chicago Cubs celebrate after scoring during the second inning of a game against the Pittsburgh Pirates at Wrigley Field on September 14, 2019 in Chicago, Illinois. ( Nuccio DiNuzzo/Getty Images )

CHICAGO - Kris Bryant and rookie Nico Hoerner each homered among three hits, and the Chicago Cubs went deep four times to set a club record with 237 home runs as they pounded the Pittsburgh Pirates 14-1 on Saturday.

Bryant hit a two-run shot in the fourth and had four RBIs. Hoerner’s second homer in two days, a three-run drive in the sixth, broke the Cubs’ old mark of 235, established in 2004.

Ben Zobrist and Victor Caratini added solo shots as the Cubs used a second straight big day at the plate to strengthen their bid for a fifth straight postseason berth. Chicago has outscored Pittsburgh 31-9 in the first two games of the series and won three straight overall.

Chicago entered in the second NL wild card spot, one game ahead of Milwaukee and four games behind NL Central-leading St. Louis. The Cardinals hosted the Brewers on Saturday night.

Kyle Hendricks (11-9) allowed a run on seven hits in six innings while walking one for his third straight solid outing. He has a 1.52 ERA in the span.

Nicholas Castellanos doubled twice to take over the major league lead with 52 and drove in three runs. Anthony Rizzo had two RBIs and was one of four Chicago batters hit by pitches.

Bryant’s two-run shot to the left-center basket in the fourth inning was his 29th homer this season. It was the 136th of his career, tying him with Ernie Banks for the most by a Cubs player in his first five seasons.

Playing in his sixth game since joining the Cubs on Monday, Hoerner improved his batting average to .417.

Both benches cleared briefly in the sixth after pinch-hitter David Bote ducked into a high pitch from reliever Clay Holmes and was hit on the shoulder. Bote, the fourth Cubs batter plunked, shouted at Holmes before going to first and the teams returned to their dugouts without an altercation.

Castellanos lined a double to the left-field corner with the bases loaded in the second to give Chicago a 3-0 lead. Bryant followed with an RBI single.

Zobrist hit his first homer in the third to make it 5-0. The 2016 World Series MVP didn’t play in the majors from May 6 until Sept. 3 as he went on the restricted list to deal with a divorce.

The Cubs scored three times in the fifth to reach double digits for the second straight day, following a 17-8 win on Friday.

After Rizzo singled in two runs, Holmes entered and grazed Castellanos with an inside pitch to load the bases. Holmes plunked Bryant on the shoulder with his first pitch to the slugger to force in a run.

Pirates: 1B Josh Bell is day-to-day (groin strain) after leaving Friday’s game. ... CF Starling Marte (left wrist sprain) was out of the lineup for a sixth straight game and was limited to pinch running.

Cubs: INF Addison Russell remains under the concussion protocol after being beaned last Sunday in Milwaukee. There’s no timetable for his return. ... RHP Craig Kimbrel (right elbow inflammation) was scheduled for light toss on Saturday. Manager Joe Maddon expects to know more about a possible return date for the closer after he throws a bullpen session on Sunday.