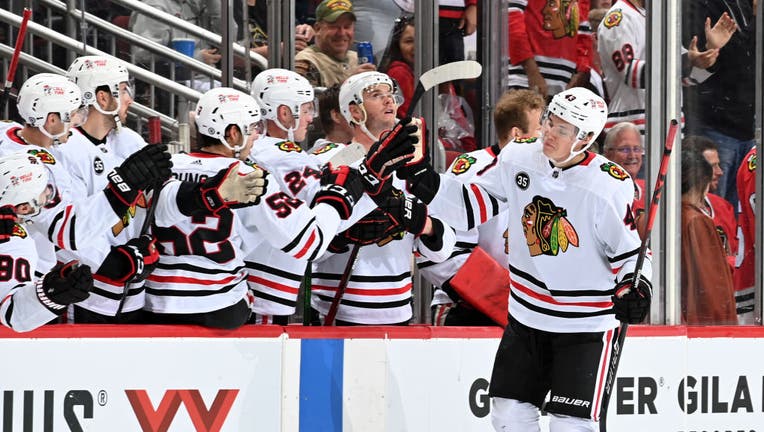 GLENDALE, ARIZONA - APRIL 20: Alex Vlasic #43 of the Chicago Blackhawks celebrates with teammates on the bench after scoring his first career NHL goal against the Arizona Coyotes during the second period at Gila River Arena on April 20, 2022 in Glend

GLENDALE, Ariz. - Alex DeBrincat scored his 40th goal of the season with 37 seconds left in overtime, giving the Chicago Blackhawks a 4-3 victory over the Arizona Coyotes on Wednesday night.

Jake McCabe, Dominik Kubalik and Alex Vlasic also scored for Blackhawks, who won for the second time in 12 games after squandering a 3-1 lead in the final 10:18 of regulation.

"It feels like we’ve been battling every night, but good to come out with a win.," DeBrincat said. "We let them come back in the game a little, but it’s nice to get a win and feel good about our game."

Barrett Hayton, Nate Smith and Anton Stralman scored for the Coyotes, who have lost eight in a row and 15 of 17. Arizona has 13 goals during its losing streak and entered the game last in the league at 2.43 goals per game.

Kevin Lankinen had 32 saves for the Blackhawks, who have not won in regulation since March 23.

"When we have the lead, we don’t realize that we don’t need to score a goal every shift we get out there," interim coach Derek King said. "We had a 3-1 lead, sometimes you have to have a live-to-fight-another-day kind of attitude. That’s where we’re making mistakes and that’s what cost us for the season."

"It’s awesome," DeBrincat said. "I’ve obviously had a lot of good players that I’ve played with and a lot of credit to them giving me a few back-door tap-ins. I don’t think you cherish it as much when it’s in your second season and then you realize how hard it is to get back."

Coyotes goaltender Karel Vejmelka made 34 saves in his 49th game, a franchise record for rookie goaltenders. He is the first rookie in NHL history with four games of at least 46 saves.

Smith’s first career goal, in his fifth game, pulled the Coyotes within 3-2 midway through the third period.

Stralman tied the game at 13:23 of the third, sending a wrist shot high on the stick side after a Chicago giveaway as the teams skated 4 on 4 after coincidental minor penalties at 12:15.

"That’s two games in a row we battled back," Coyotes coach Andre Tourigny said. "The start was no good, but the way we bounced back. The leadership we had in the room between the first and the second (periods) and the character of our older players showed. It was good for our young guys to be part of it."

Arizona had won the last two in the season series and was attempting to beat Chicago three times in a season for the first time since 2011-12.

McCabe opened the scoring 42 seconds into the game when he flipped in a rebound through traffic from the slot. McCabe started the play with a pass from the right circle in front of the net. Vejmelka got his stick on Jonathan Toews’ shot but left it in front.

Kubalic made it 2-0 when he converted a rebound from point-blank range at 15:32 of the first. Vejmelka stopped Tyler Johnson’s shot from the slot, but the Coyotes failed to clear the puck, leaving Kubalic with an open net.

Hayton cut the Blackhawks’ lead to 2-1 at 12:43 of the second period when his rebound shot trickled through Lankinen’s pads. Lankinen was caught on the wrong side of the net, but recovered to make a sprawling glove save on Nick Schmaltz’s wraparound. The puck came loose and Hayton scored, and the goal was upheld after review.

Vlasic made it 3-1 when he was credited with his first career goal on a shot from the left circle appeared to carom off Schmaltz in the crease and found the net at 16:25 of the second period.

"I mean it’s good to get out of the way," Vlasic said. "I don’t really know how that one snuck in there, but I’m just glad it went in."

NOTES: The Coyotes are expecting a good crowd Friday when F Alex Ovechkin leads Washington into Gila River Arena. ... The Coyotes have three games remaining in Glendale before moving to Arizona State University’s 5,000-seat campus arena in Tempe in 2022-23. The arena is to open in the fall of 2022, and Coyotes will pay $19.7 million to bring the arena up to NHL standards. … Coyotes F Andrew Ladd became the fourth player from the 2004 draft class to play in 1,000 games, joining Ovechkin, Blake Wheeler and Travis Zajac. … Coyotes F Nick Ritchie (upper body) was a late scratch and is listed as day to day. … F Jay Beagle (lower body) left in the first period and did not return. … Vejmelka played in his 49th game, a franchise record for rookie goaltenders. He has four games with at least 46 saves this season, the most by a rookie in NHL history. … Chicago F Kirby Dach (shoulder) and F Mackenzie Entwistle (shoulder) are not on the trip, which includes game in Los Angeles on Thursday and San Jose on Saturday. … Arizona F Antoine Roussel returned after missing the previous 21 games with a lower-body injury.