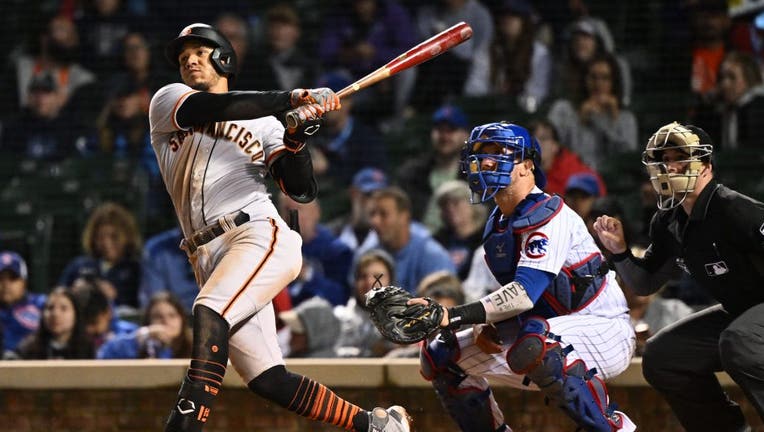 Thairo Estrada #39 of the San Francisco Giants watches his home run sail over the left field fence in the seventh inning against the Chicago Cubs at Wrigley Field on Sept. 11, 2022 in Chicago, Illinois. (Photo by Jamie Sabau/Getty Images)

CHICAGO - Thairo Estrada homered in the seventh, Wilmer Flores connected in the eighth and the San Francisco Giants held on to beat the Chicago Cubs 4-2 on Sunday night.

The Giants kept the Cubs’ offense in check while using six pitchers on a bullpen day, though Zach McKinstry had four hits for the Cubs, who have dropped 15 of 21.

Estrada, Evan Longoria and Austin Dean had two hits each for the Giants, who had lost five of six.

Flores hit a two-run shot off Hayden Wesneski (1-1) after Lewis Brinson walked for his 18th homer of the season, matching a career high and snapping an 0-for-19 skid.

Estrada led off the seventh with his 13th of the season. The homer ended Wesneski’s streak of six scoreless innings to begin his major league career.

Seiya Suzuki homered off Scott Alexander in the eighth to pull the Cubs within 4-2.

Left-handed starter Wade Miley gave up a run and four hits, struck out five and walked one in five innings for the Cubs. It was his second outing after missing three months with a shoulder injury.

Zack Littell (3-3) threw 1 2/3 shutout innings to earn the victory. Camilo Doval worked around a hit batter and a triple in the ninth, pitching 1 1/3 scoreless innings for his 22nd save.

John Brebbia allowed a hit in a scoreless first inning as the Giants opener. San Francisco relied on its bullpen to fill in for Alex Wood, who went on the 15-day injured list with a shoulder injury on Sept. 3.

J.D. Davis doubled off Miley and scored on Estrada’s two-out single for a 1-0 Giants lead in the fourth.

The Cubs tied it in the fifth. McKinstry doubled off Yunior Marte and scored when Rafael Ortega singled and advanced on right fielder Luis González’s fielding error. Ortega moved to third on a wild pitch but was stranded.

No rain fell during the game, which started a few hours after the Chicago Bears beat the San Francisco 49ers 19-10 at a rain-soaked Soldier Field.

Cubs DH Franmil Reyes was shown on the ESPN broadcast singing Whitney Houston’s "I Will Always Love You" in the dugout.

Giants: C Austin Wynns was available off the bench for the second straight game after he was struck in the head by a Drew Smyly pitch on Friday.

Cubs: SS Nico Hoerner (right tricep tightness) exited after the fifth inning. … 2B Nick Madrigal (right groin strain) said he hopes to return before season’s end but knows he has to be smart about the injury. He went on the 10-day IL Saturday. Madrigal said he plans to make "major changes" after dealing with injuries the last two seasons. "If it’s not feeling right, I’m probably not going to get in there," he said. "So I’d love to, but we’re going to have to see how it goes."