Former Chicago Cubs star Ben Zobrist identified in court filings the "genesis" of his split with his wife, Christian pop singer Julianna Zobrist, as details of their messy divorce trickled out.

According to court documents obtained by the Chicago Tribune on Monday, the 2016 World Series MVP said in his filing that the retirement party Julianna Zobrist threw for their pastor Byron Yawn in December 2018 was the real start of their marriage’s downfall. Zobrist said his wife spent $30,000 on the party, which was held at their farm.

"Mrs. Zobrist paid for the party out of the ‘farm account’ that her husband typically did not review, apparently to keep the cost of the party unknown to him. … Mrs. Zobrist and Pastor Yawn both became intoxicated and are dancing ‘on’ each other in a provocative way that was very embarrassing to Ben Zobrist, especially in front of their close church friends," the filing read, via the Tribune.

"Wife took umbrage at her husband’s rebuking her privately after the party for acting in this manner in public. However, unknown to husband, wife was already ‘in love’ with Pastor Yawn."

Julianna Zobrist said in her court filing she began to have "new thoughts" and reached out to Yawn for apparent advice. Her relationship with Yawn would then grow to something more than just a pastor-patron relationship. 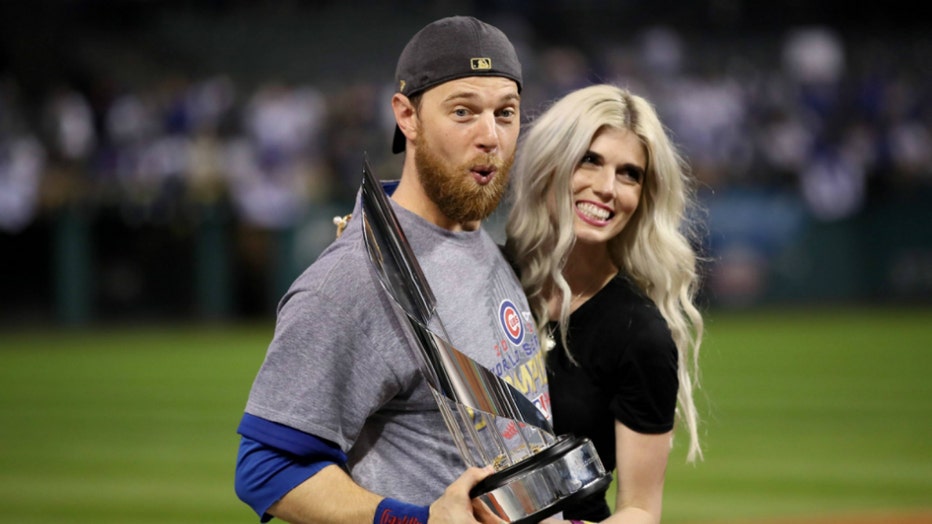 2016 World Series MVP Ben Zobrist of the Chicago Cubs celebrates with his wife Julianna Zobrist after defeating the Cleveland Indians 8-7 in Game Seven of the 2016 World Series at Progressive Field on November 2, 2016 in Cleveland, Ohio. (Ezra Shaw/Getty Images)

"Wife reached out to her pastor, Byron Yawn, and found solace in his support," her filing said. "The parties had a friendship with Mr. Yawn and his family. Wife’s friendship and connection with Mr. Yawn grew over a period of time and changed into a romantic relationship. In March of 2019, wife had an affair with Mr. Yawn and admitted this relationship to husband in May of 2019. Although she did not admit the adultery until later."

Before the start of the 2019 season, Ben Zobrist said his wife admitted to having an "emotional affair" with Yawn. He said he was alerted to the affair by Yawn’s wife in May 2019. The MLB player took a leave of absence on May 8 – and at the time it was unknown what the reason was for.

Julianna Zobrist allegedly told her husband the affair was over but is accused of keeping in contact with the former pastor and even allegedly bought a "burner phone" to talk to him. She admitted to getting the phone in June 2019 and later threw it away. She said getting the new phone and changing cellphone carriers allowed her to get "rid of her phone that contained the nude photos and text messages that she had sent to Yawn."

The affair was first publicly revealed in June, according to the Peoria Journal Star.

Julianna Zobrist is seeking $4 million in the divorce as she claimed her husband allegedly failed to "preserve marital assets" when he took a leave of absence in 2019. She claimed her husband "intentionally and voluntarily stopped working" and went from "the top of his game" to "giving up," which affected the household income.

She is reportedly seeking an even split of marital assets and the large sums, claiming the figure is the "amount of money he failed to preserve by abruptly and intentionally failing to satisfy his baseball contract."

According to Spotrac, Zobrist is estimated to have made about $78.3 million during his 13-year baseball career.

Yawn is also accused of having Zobrist sign autographs, get tickets for baseball games, host events at his home and send personal messages to newly baptized members of the church, the paper reported. The suit also claimed that Yawn received $3,500 monthly checks from a nonprofit Zobrist founded for two months after he was fired as executive director in March 2019.

Ben Zobrist is also suing Yawn for $6 million in a separate case for alleged "intentional inflection of emotional distress" and defrauding his charity, according to the Chicago Tribune.