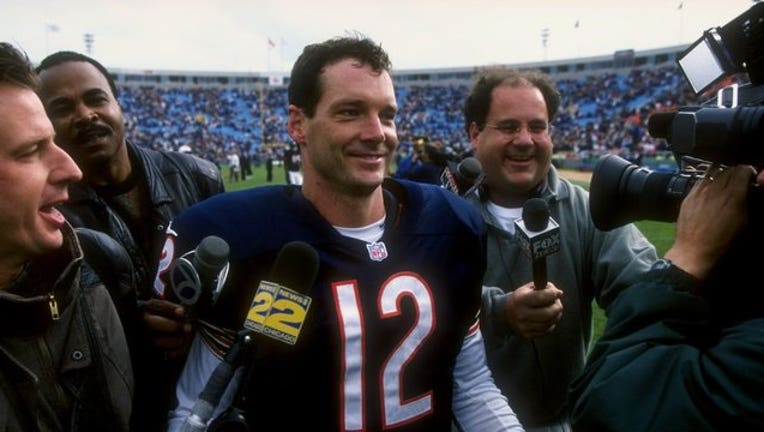 Quarterback Erik Kramer #12 of the Chicago Bears talks to reporters following a game against the Detroit Lions at Soldier Field on October 4, 1998 in Chicago, Illinois. (Tom Pidgeon/Stringer/Getty Sports)

The arraignment was reported by the Los Angeles Times.

Kramer, whose career in the NFL and CFL spanned over a decade, was arrested in June on suspicion of felony corporal injury to a spouse or cohabitant at his home in Agoura Hills, Calif., but was released hours later on a $50,000 bond.

“I am terrified that he is out looking for me at this very moment and will kill me and my daughter,” Kramer’s wife, Cortney Baird, said at the time.

Baird quickly obtained an emergency restraining order and immediately filed for divorce. She claimed her altercation with her husband stemmed from an argument the night before, according to a petition seen by TMZ Sports.

When she approached him to address the situation the following morning, she claims he lost his temper, swore at her, pushed her and threw household items at her, including a knife block, although he missed. He also allegedly started smashing other objects, including glasses and picture frames, on the ground.

Kramer, who also played for the Atlanta Falcons and San Diego Chargers and led the Lions to the NFC Championship Game in 1991, has suffered from severe depression.

The 53-year-old said the problem worsened when in 2011 his 18-year-old son, Griffen, was found dead at a friend’s home from a heroin overdose, according to the Los Angeles Daily News. His mother died of cancer a year later.

Kramer attempted suicide in 2015, ultimately surviving a gunshot wound to the head.

His ex-wife Marshawn Kramer said at the time: “He is a very amazing man, a beautiful soul, but he has suffered depression since he was with the Bears. I can promise you he is not the same man I married.”

Kramer faces up to a year in prison if convicted, KCBS-TV reported.