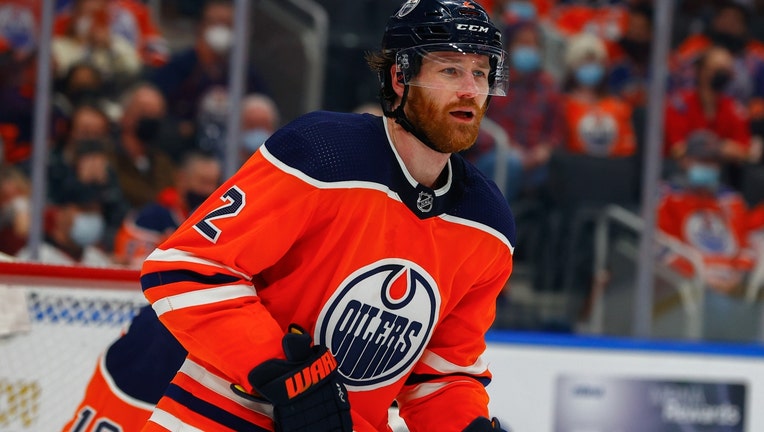 Edmonton Oilers Defenceman Duncan Keith in action in the second period during the Edmonton Oilers game versus the Calgary Flames on January 22, 2022 at Rogers Place in Edmonton, AB. (Curtis Comeau/Icon Sportswire via Getty Images / Getty Images)

EDMONTON, Alberta - Family brought Duncan Keith to Edmonton after a stellar run as the backbone of the Chicago Blackhawks’ defense.

And following a season with the Oilers, family is why Keith feels he’s in a good place to end his NHL career after 17 seasons, three Stanley Cups and two Norris Trophy awards as the league’s top defenseman.

Keith announced his retirement Tuesday, at times fighting back tears during a news conference as he thanked teammates, coaches and family members for helping him along the way of his Hall of Fame-caliber career.

Keith will turn 39 on Saturday, and said there’s a noticeable change in how he’s felt in recent postseasons. That, coupled with the desire to spend more time with his son Colton, helped him reach a difficult decision.

"I still love the game, always will," Keith said, Colton by his side. "But with getting older ... and the thought of being around my son more, and being around him and his hockey — being able to help my brother coach our boys and my niece — the more it got closer to that, the more excited about it I became."

In his final season, he put up 21 points (one goal, 20 assists) over 64 games with an average ice time of nearly 20 minutes. He added a goal and four assists in 16 playoff outings as the Oilers made it to the Western Conference final for the first time since advancing to the Stanley Cup series in 2006.

"I think that’s how I wanted to go out, knowing that I still had some game left in me and I’m relatively healthy," the four-time all-star said.

Keith thanked many of the teammates he found success with in Chicago — Jonathan Toews, Patrick Kane and Patrick Sharp — but had special praise for longtime defense partner Brent Seabrook. Keith and Seabrook played their 1,000th game together on Dec. 11, 2018.

Keith said the opportunity to play with Edmonton superstars Connor McDavid and Leon Draisaitl "speaks for itself" and called them "the two best players in the world."