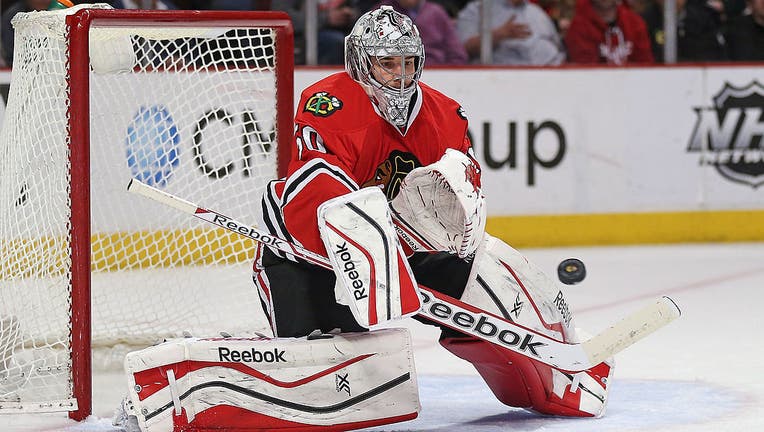 CHICAGO, IL - APRIL 03: Corey Crawford #50 of the Chicago Blackhawks makes a save against the Minnesota Wild at the United Center on April 3, 2014 in Chicago, Illinois. (Photo by Jonathan Daniel/Getty Images)

CHICAGO - Corey Crawford, who helped the Chicago Blackhawks win two Stanley Cups, has retired less than three months after signing with the New Jersey Devils and less than a week before the start of the NHL season.

The 36-year-old goalie made the announcement Saturday after a week of speculation about his future. He did not practice this week. Devils coach Lindy Ruff said the decision was for personal reasons.

"I have been fortunate to have had a long career playing professional hockey for a living," Crawford said in a statement. "I wanted to continue my career, but believe I’ve given all I can to the game of hockey, and I have decided that it is time to retire."

Crawford said playing in the NHL was a childhood dream and he was proud to have been a part of winning two Stanley Cups.

He played for 10 NHL seasons and 488 regular-season games. He signed a two-year, a $7.8 million contract as a free agent with the Devils in October.

Crawford made his NHL debut in 2006. He became Chicago’s starting goalie in 2010-11 when he also finished fourth in Calder Trophy voting, winning 33 games and posting four shutouts with a .917 save percentage. He earned his first William M. Jennings Trophy in 2012-13, together with teammate Ray Emery, for Chicago allowing the fewest goals thanks in part to his 1.94 goals-against average.

Crawford led Chicago to a tie with Montreal (Carey Price) for the fewest goals allowed in 2014-15, earning his second William M. Jennings Trophy. In the 2014-15 playoffs, Crawford helped lead the Blackhawks to another Stanley Cup victory thanks to his 13 wins and two shutouts. He set career-best marks in 2015-16 in wins (35) and shutouts (7) while finishing fifth in Vezina Trophy voting.