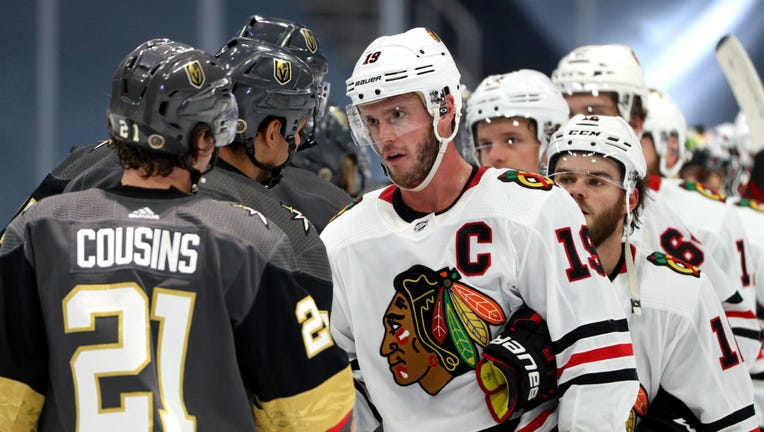 EDMONTON, Alberta - Facing an early deficit, the Vegas Golden Knights were sparked by its stars, setting the stage for Alex Tuch to send top-seed in the Western Conference into the next round of the Stanley Cup playoffs.

Tuch scored the tiebreaking goal 1:34 into the third period, and the Vegas Golden Knights rallied from an early two-goal deficit to eliminate the Chicago Blackhawks with a 4-3 win in Game 5 of their first-round playoff series on Tuesday night.

Vegas became the first team in the playoffs to advance to the conference semifinals. The Golden Knights will face the lowest remaining seed in the next round.

“We were glad to get it over with tonight because they weren’t going away quietly,” Vegas coach Peter DeBoer said. “They made us earn it. It was a hard fought hockey game. We got in that hole early and I just like how we’ve responded to adversity when it’s appeared during this playoff.”

Max Pacioretty scored in the closing seconds of the first period and Mark Stone scored less than a minute into the second as the Golden Knights quickly erased Chicago’s early 2-0 advantage. Alec Martinez scored on a power play midway through the second period after Patrick Kane had given Chicago a 3-2 lead.

Robin Lehner made 23 saves including a couple of big stops in the closing seconds, and improved to 8-1 since being acquired by the Golden Knights from Chicago back in February.

Lehner had an emotional trip through the handshake line with his former teammates after the game.

“It felt really nice for me to close this out because it’s a bit weird playing your old teams, especially that group,” Lehner said. “That’s a hell of a group, they treated me really well, got a lot of friends on that team, all love for that organization.”

Corey Crawford, who made 48 saves in a masterful Game 4 performance to keep Chicago alive, made 35 saves in Game 5. But Crawford couldn’t withstand a continued onslaught of pressure by the Golden Knights, capped by Tuch’s goal, using his size to hold off defenseman Adam Boqvist and score the deciding goal.

“We gave it a good chance the last couple of games. (Crawford) was great and gave us a chance,” Kane said.

Chicago started strong looking to keep going after trailing in the series 3-0. Toews poked a rebound past Lehner midway through the first period to give Chicago the early lead, and DeBrincat finished a beautiful build up at 18:19 for the two-goal advantage. DeBrincat was the recipient, but it was Connor Murphy’s spin and feed to Dylan Strome that set up DeBrincat’s second goal of the postseason.

But the potency of the Golden Knights’ offense quickly responded. Pacioretty collected Brayden McNabb’s deflected pass at the side of the net and scored his first of the playoffs with 31 seconds left in the period. And less than a minute into the second, Stone tipped William Karlsson’s pass over Crawford’s glove and the Golden Knights were even.

“When I scored I kind of had that feeling that we were dialed in and getting it back,” Stone said.

Kane scored his 52nd career playoff goal, but Martinez’s goal was the first scored on the power play by Vegas in the series. It snapped Chicago’s streak of 14 straight power plays killed off, dating back to its qualifying series win over Edmonton.

“It was a great opportunity for us to come in and play some meaningful hockey and a lot of guys stepped up to the plate and showed what they could do,” Toews said.

NOTES: Vegas is the third franchise in league history to earn at least one playoff series win in two of its first three NHL seasons, joining the Rangers (1927-29) and Blues (1968-70). ... Paul Stastny returned to the lineup for Vegas after missing the previous two games. He played 15:56. ... Tuch scored with 4:47 remaining, but the goal was disallowed after video review for incidental goaltender interference.