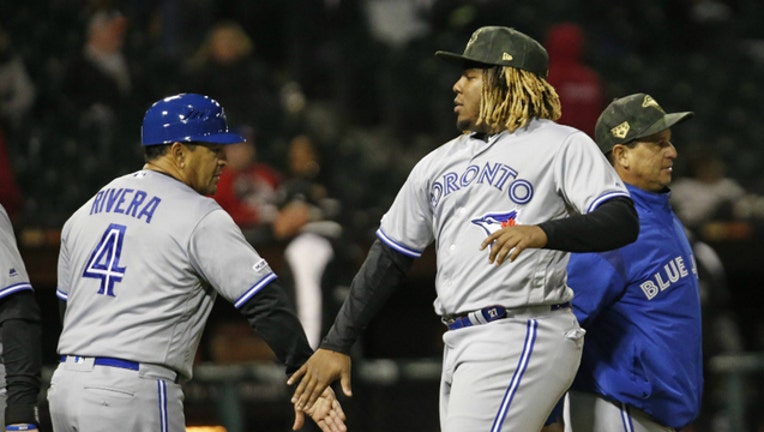 CHICAGO (AP) - Vladimir Guerrero Jr. hit a drive that sliced through the misty air and carried to deep center. But it looked within range for a sprinting Leurys Garcia, who got a glove to the ball.

Then, the ball popped out of Garcia's glove - and went over the wall.

"There is not an excuse," Garcia said through a translator. "I saw the ball very well. I just couldn't make the play."

It was Guerrero's third career home run, part of a Toronto offensive barrage that battered the White Sox 10-2 on Friday night.

"Any time he's at the plate, you feel like he's got a chance to hit a bomb, not just a home run," said manager Charlie Montoyo.

Justin Smoak and Danny Jansen also homered as the Blue Jays tied their highest run total of the season. All nine starters had at least one hit, and eight scored at least a run.

Aaron Sanchez allowed two runs in three innings before leaving the game in the fourth with a blister on his right middle finger. Sanchez has had a history with blisters.

"The last time it happened, it happened in Boston and he ended up pitching five days later," Montoyo said. "We're hoping for the same outcome."

Ivan Nova's home woes continued as he allowed nine runs and eight hits with four walks in three innings. Nova (2-4) has allowed 20 earned runs in 11 innings for a 16.36 ERA in three starts at Guaranteed Rate Field this season.

"Couldn't throw a curveball for a strike," Nova said. "Threw a slider that didn't do nothing."

Smoak hit his sixth homer to give Toronto a 1-0 lead in the first. Jansen made it 3-0 in the second with his first homer of the season.

Toronto added four runs in the third, before the White Sox scored twice in their half of the inning on Garcia's forceout and Yoan Moncada's RBI single.

Guerrero's drive in the fourth made it 9-2, and Eric Sogard added an RBI double in the fifth.

White Sox: LHP Manny Bañuelos has been placed on the injured list, delivering another blow to a Chicago pitching staff that lost Carlos Rodón and Nate Jones for the season earlier this week. "Hopefully it's a very, very short stint," manager Rick Renteria said. ... In a corresponding move, the White Sox recalled right-hander José Ruiz from Triple-A Charlotte. Ruiz is 0-0 with a 5.40 ERA in 11 appearances this season.