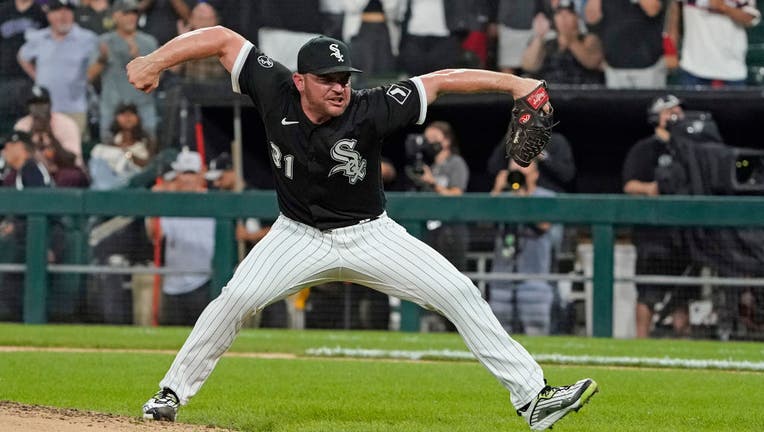 Liam Hendriks #31 of the Chicago White Sox gestures after getting the final out against the Oakland Athletics during the ninth inning at Guaranteed Rate Field on August 16, 2021 in Chicago, Illinois. (Photo by David Banks/Getty Images)

CHICAGO - Michael Kopech got the ball to Craig Kimbrel, and he handed it over to Liam Hendriks.

The Chicago White Sox like their chances when they go to their bullpen.

Kimbrel worked out of a jam in the eighth inning and Hendriks got the save against his former team, leading the White Sox to a 5-2 victory over the Oakland Athletics on Monday night.

"We got some weapons out there. You saw three of them tonight," manager Tony La Russa said.

Eloy Jiménez hit a tiebreaking RBI single and Seby Zavala drove in two runs as Chicago improved to an AL-best 40-22 at home. It was the first meeting between the teams since the A’s eliminated the White Sox in the first round of the playoffs last year.

Oakland dropped to 4-3 on a 10-game trip after it lost two of three at last-place Texas over the weekend. It also fell to second in the AL wild-card standings, a half-game back of idle Boston and 1 1/2 games ahead of the New York Yankees.

Matt Chapman homered for the third straight day for the A’s, and Mark Canha had an RBI single. Frankie Montas (9-9) was charged with three runs and eight hits in five innings.

"I felt like I was fighting with my mechanics the whole game," Montas said. "I didn’t have my command."

The game was tied at 2 when Jiménez’s fifth-inning liner went off Chapman’s glove at third and into left field, driving in Tim Anderson from second. The AL Central leaders added another run in the sixth on a safety squeeze bunt by Zavala.

That was enough for Chicago’s bullpen after a couple of rocky outings of late.

"They got good arms ... and then reinforced, obviously, with Kimbrel here," A’s manager Bob Melvin said.

After Kopech threw two hitless innings, Kimbrel powered his way out of trouble while striking out the side in the eighth. With one out and runners on second and third after Jed Lowrie’s ground-rule double, Kimbrel fanned Chapman and Josh Harrison to reach 1,001 Ks for his career.

"He’s as tough as he is talented," La Russa said.

Hendriks then struck out the side in order for his 27th save in 33 opportunities. The right-hander agreed to a $54 million, three-year contract with Chicago in January after spending the last five seasons in Oakland.

Hendriks was hit hard in his previous two outings, surrendering three homers and six earned runs in 1 1/3 innings against the Yankees. Kimbrel, who was acquired in a July 30 trade with the Cubs, returned to the mound after he allowed Aaron Judge’s leadoff homer in the eighth inning of Saturday’s 7-5 loss to New York.

"We got those two guys on the back end that you could flip a coin with and be comfortable that they’re going to dominate," Kopech said. "I don’t think any rough stretches for any of us dictate what kind of team this is. I think everybody knows what we’re capable of."

Athletics: Harrison returned to the starting lineup after he missed three games with a strained right quadriceps.

White Sox: LHP Carlos Rodón (shoulder fatigue) threw from 90 feet. He could return during next week’s four-game series at Toronto. "That’s what we are kind of eyeing right now," Rodón said. "Like I said, it’s kind of a day-by-day thing. Today I felt great. Tomorrow is going to be another great day. It’s just progressing and taking the steps and getting ready for if it’s Toronto, then Toronto." ... OF Billy Hamilton (right oblique strain) is progressing really well, according to La Russa. "We’re going to really try to extend him in the workouts the next few days," La Russa said. "My expectation is it’ll be good for him."

Right-handers Chris Bassitt (12-3, 3.06 ERA) and Reynaldo López (1-0, 1.35 ERA) pitch on Tuesday night. Bassitt, who broke into the majors with the White Sox in 2014, is 2-0 with a sparkling 0.45 ERA in his last three starts for Oakland. López has permitted one earned run in 12 innings over his last six appearances for Chicago.