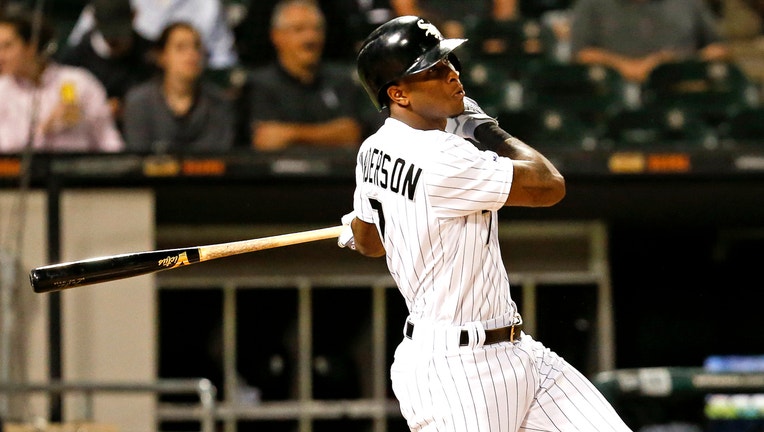 Tim Anderson hits a single during the third inning of a game against the Cleveland Indians on September 25, 2019 in Chicago. (Nuccio DiNuzzo/Getty Images)

CHICAGO - The Cleveland Indians know they have little margin for error this late in the AL wild-card race.

They made one too many Wednesday night.

Shane Bieber got tagged early and the Indians lost ground in the wild-card chase, falling to the Chicago White Sox 8-3. Their second defeat in the last nine tries dropped them 1 1/2 games behind Tampa Bay for the second wild-card spot.

"Crazier things have happened," said Bieber, who had won three in a row but allowed five runs -- three earned -- on 10 hits in 5 2/3 innings. "So we got to come here prepared tomorrow like any other game and see how the cards fall."

A routine throwing error by first baseman Carlos Santana put the visitors behind 3-0 in the first. Two unearned runs scored on the play.

"That's a shame because (Santana) makes that play in his sleep," manager Terry Francona said. "That one time he didn't, and it hurt. But he'll be back tomorrow."

The Indians' loss clinched the AL Central title for Minnesota.

"I don't know about inevitable," Francona said. "I mean, I don't know if you look at things like that. Now the next best thing is, we need to win tomorrow and keep this thing going."

"Congrats to Minnesota," said Francisco Lindor, who added, "The ball is round and it comes in a square box. So you never know what can happen."

Jose Ramirez hit a solo home run for Cleveland. On Tuesday night, in his first two plate appearances after missing a month with a broken hand, he hit a grand slam and a three-run homer.

Tim Anderson matched a career high with four hits and also scored two runs for Chicago. He improved his batting average five points to an AL-best .339 with his sixth fourth-hit game of the season, most in the major leagues. Jose Abreu drove in his league-high 122nd run with the last of his three singles.

"I put the work in and it's showing," Anderson said.

The Indians trailed 5-3 in the seventh when Welington Castillo greeted reliever Tyler Clippard with three-run homer to break it open. Yoan Moncada doubled and Yolmer Sanchez singled off reliever Oliver Perez to start the inning.

White Sox starter Ross Detwiler (3-5) allowed three runs on five hits in five innings to earn the victory, his first since Aug. 25 against Texas. The left-hander walked none and struck out one.

Leury Garcia hit the fourth leadoff homer of his career and third this season for the White Sox, and Anderson and Abreu followed with singles. With one out, Zack Collins hit a slow roller that Santana fielded close to the line and lobbed over the head of catcher Roberto Perez.

Now the Indians may have no choice except to win their final four games to have a chance for a playoff berth.

"Yeah," Lindor said. "It has been like that the past two weeks, so yeah."

Francona had been through enough Septembers to dwell on anything except the task at hand.

"I'm aware of it, obviously," Francona said of the playoff picture. "I just think the best way to get there is to try to conquer what's right in front of you. It appears we're going to have to keep winning. So talking about four days from now just doesn't seem to help. If it did, I'd do it. I just don't see an advantage."

White Sox: Garcia (sore right shoulder) and Matt Skole (tight right abdomen) left the game in the fifth inning. Both were said to be day-to-day. ... Rookie OF Eloy Jimenez (ear-throat infection) was not with the club. Manager Rick Renteria indicated he could be available Thursday night.