CHICAGO - Marc-Edouard Vlasic made his NHL debut way back in 2006. And even he is impressed with what fellow defenseman Erik Karlsson is doing right now.

"Every shift he’s creating something," Vlasic said. "He’s dangerous every time he’s on the ice."

Karlsson extended his point streak to a franchise-record 13 games, and the San Jose Sharks beat the lowly Chicago Blackhawks 5-2 on Sunday night.

Vlasic, Jonah Gadjovich and Alexander Barabanov scored in the second period for San Jose, which had dropped three in a row and six of seven overall. Timo Meier and Evgeny Svechnikov added third-period goals.

Karlsson had two assists, breaking the record he shared with San Jose forwards Rob Gaudreau (1992-93) and Jonathan Cheechoo (2005-06). The two-time Norris Trophy winner has two goals and 19 assists during his streak.

Patrick Kane and Sam Lafferty scored for Chicago in the opener of a seven-game homestand. The last-place Blackhawks have lost four straight and 12 of 13 overall.

"I think when one thing bad happens, we’re not ready, at this point, to turn the page and get back to what we were doing well," first-year Chicago coach Luke Richardson said. 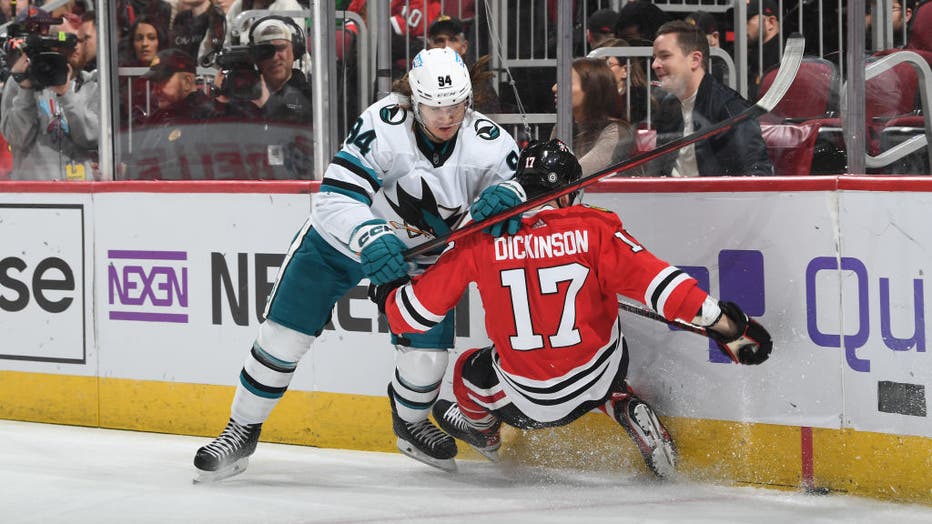 Alexander Barabanov #94 of the San Jose Sharks pushes into Jason Dickinson #17 of the Chicago Blackhawks in the first period at United Center on January 01, 2023 in Chicago. (Photo by Bill Smith/NHLI via Getty Images)

Chicago trailed 3-2 after two, but Meier cleaned up a rebound for his 21st goal 3:52 into the third period and Svechnikov helped put it away with his fourth with 7:05 left.

The crowd at the United Center booed after the final seconds ticked off. The Blackhawks dropped to 5-13-2 at home this season.

"I just think our battle level wasn’t as high as the other team for 60 minutes tonight," Richardson said.

San Jose trailed 2-0 in the second before scoring three times in the last five minutes of the period.

"Just loved our perseverance and our mental toughness and how we responded," Sharks coach David Quinn said.

Gadjovich was credited with his second of the season off a scramble in front at 15:12. Then Vlasic got his first goal since March 26 when Matt Benning’s centering pass went off his right skate and into the net at 15:53.

The 35-year-old Vlasic became the second NHL defenseman to score in his 1,200th game, joining Duncan Keith for Edmonton last season. Vlasic’s 77th career goal was initially waved off, but the officials ruled a replay review showed he redirected the puck instead of kicking it home.

Barabanov then gave San Jose a 3-2 lead when he drove to the net and beat Petr Mrazek with a backhand. Barabanov also scored during Saturday night’s 5-2 loss at Dallas.

The outburst for San Jose occurred after offensively challenged Chicago scored twice in the second. Kane beat Kaapo Kahkonen from the slot after the goaltender broke his stick behind the Sharks net. Then Andreas Athanasiou made a great pass to Lafferty for the tap-in at 13:30.

Blackhawks defenseman Ian Mitchell skated in his first NHL game since Dec. 23. He replaced Caleb Jones in the lineup.

Mitchell, who turns 24 on Jan. 18, had been a healthy scratch. He was selected by Chicago in the second round of the 2017 draft.

Sharks: At Anaheim on Friday night.

Blackhawks: At home against Tampa Bay on Tuesday night.