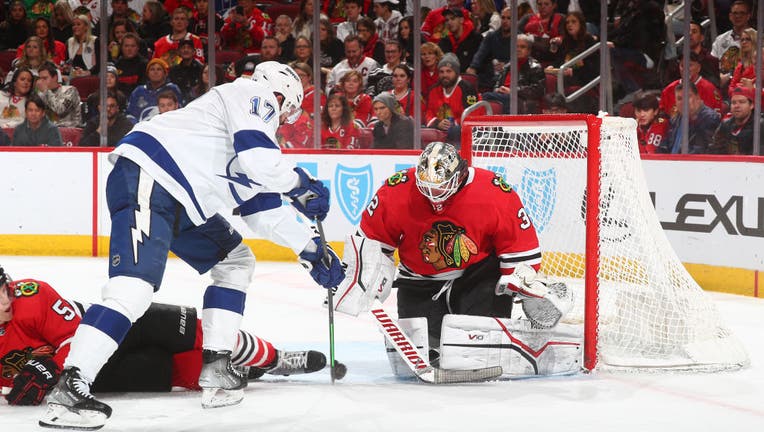 CHICAGO, ILLINOIS - JANUARY 03: Alex Killorn #17 of the Tampa Bay Lightning scores on goalie Alex Stalock #32 of the Chicago Blackhawks in the third period at United Center on January 03, 2023 in Chicago, Illinois. (Photo by Chase Agnello-Dean/NHLI v

CHICAGO - Alex Killorn snapped a tie in the third period, and the Tampa Bay Lightning beat the Chicago Blackhawks 4-1 on Tuesday night for their fourth straight victory.

Brandon Hagel added a goal and an assist as Tampa Bay won for the 11th time in 14 games overall. Pat Maroon and Nicholas Paul also scored in the opener of a three-game trip, and Brian Elliott made 25 saves.

Killorn was stopped by Alex Stalock on his first try, but he slammed home the rebound as he was knocked down by Blackhawks defenseman Connor Murphy. Killorn’s 12th goal of the season made it 2-1 at 7:11.

Hagel got his 15th when he scored a power-play goal with 9:46 remaining. It was Hagel’s first game at the United Center since he was traded to Tampa Bay in March.

Chicago dropped its fifth straight game, managing five goals during the slide. It is 2-20-1 in its last 23 games overall.

Seth Jones scored for Chicago, and Stalock finished with 25 stops.

The Blackhawks dressed seven defensemen after they scratched forward Tyler Johnson against his former team. Then Patrick Kane departed with an unspecified medical issue.

Defenseman Caleb Jones, Seth’s younger brother, got some ice time as a forward with Johnson out.

Chicago jumped in front when Jones scored his second of the season, knocking Taylor Raddysh’s pass into the net 4:50 into the first period.

It was the first power-play goal by a Blackhawks defenseman since Connor Murphy got one on May 1, 2021, against Florida, according to Sportradar.

Tampa Bay then tied it at 1 when Maroon tipped home Victor Hedman’s shot with 8:36 left in the first. It was Maroon’s second of the season.

The Lightning controlled much of the action in the second, but they were shut out by Stalock and the cage. Hagel, Mikhail Sergachev and Nikita Kucherov each had a shot go off a post or the crossbar.

Lightning: At the Minnesota Wild on Wednesday night.

Blackhawks: At home against the Arizona Coyotes on Friday night.