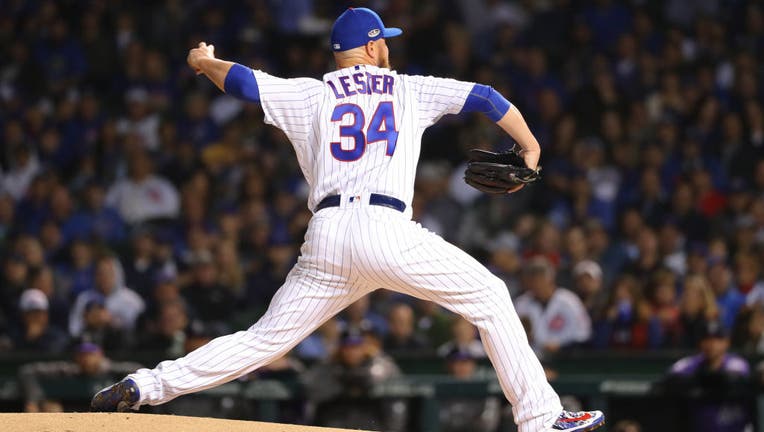 WASHINGTON - Jon Lester has been a part of three World Series champions and collected nearly 200 wins in the majors. He’s been a five-time All-Star and a Cy Young runner-up.

Now 37 and heading toward his 16th season in the big leagues, the left-hander is looking forward to being a member of a stacked Washington Nationals rotation that features three-time Cy Young Award winner Max Scherzer, 2019 World Series MVP Stephen Strasburg and Patrick Corbin.

"I’ll tell you what: It’s going to be nice to just kind of sit back and watch these guys work. I mean, obviously, I’ve seen them from afar and got to compete against them for a long time. I’m excited to work with them. It’s always nice when you go to another team and you get to see how guys work," Lester said Wednesday on a video conference after finalizing a $5 million, one-year contract that brings him to the Nationals after six seasons with the Chicago Cubs.

Lester and Washington had a 2021 agreement in principle in place last week, pending the successful completion of a physical exam. He gets a $3 million signing bonus payable on Jan. 15, 2023, and a $2 million salary this season.

"I’m just excited to kind of dig into their minds and see how they prepare and really just stay out of the way," Lester said about the top trio in Washington’s starting staff. "I want to be kind of a fly on the wall of this rotation and help out as best I can."

The pitcher and Nationals manager Dave Martinez know each other well: Martinez was the bench coach for the Chicago Cubs when Lester helped that club win the 2016 World Series for its first title in 108 years.

Lester called his free agency "kind of a weird process."

"I knew it was going to be a bit slower and whatnot," he said, "but I just didn’t think it would take to almost the end of January for something to kind of come up."

He said there were conversations with the Cubs, adding that "at the nitty-gritty, they did make an offer" — although he didn’t go into details.

Coming off a last-place finish in the NL East in 2020, Washington has had a busy offseason that already includes adding outfielder Kyle Schwarber — like Lester, from the Cubs — and lefty reliever Brad Hand via free agency, first baseman Josh Bell in a trade with the Pittsburgh Pirates and re-signing Ryan Zimmerman after he sat out last season because of the coronavirus pandemic.

Lester is 193-111 with a 3.60 ERA for his career, mostly with the Boston Red Sox and the Cubs, plus part of one season with the Oakland Athletics.

He’s been a postseason star, putting up a 2.51 ERA across 154 innings while helping Boston win a pair of championships before being a part of Chicago’s title run.

He is a workhorse who has topped 200 innings in eight regular seasons and still threw at least 170 in each of the past three full years.