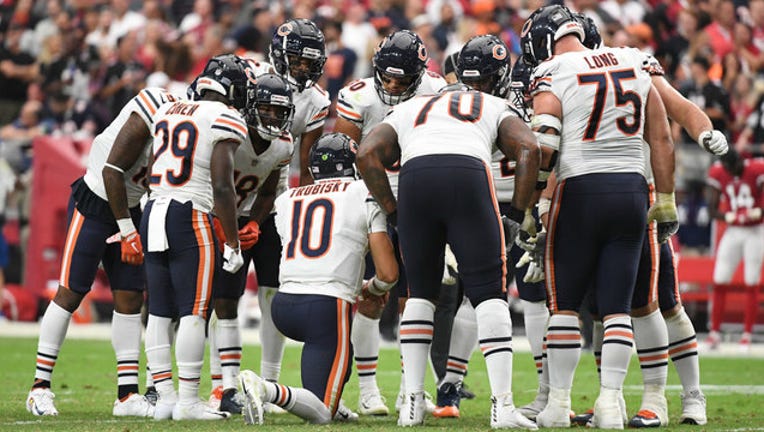 Quarterback Mitchell Trubisky #10 of the Chicago Bears talks with his team in a huddle during the NFL game against the Arizona Cardinals at State Farm Stadium on September 23, 2018 in Glendale, Arizona. (Photo by Jennifer Stewart/Getty Images)

LAKE FOREST, Ill. (AP) -- The Chicago Bears were riding high, staring down at the rest of the NFC North for the first time in five years.

They're in more familiar territory. And it's not a place they want to stay.

The Bears look to get back to winning after back-to-back losses when they host the banged-up New York Jets on Sunday.

"No one past game dictates our season, no game coming up is going to dictate our season," quarterback Mitchell Trubisky said. "We have the same attitude going every week, and I guess the last couple of weeks because we have been 0-2, I think we're even hungrier. I know I am just (excited) to get back to work and get back into that win column."

Falling below .500 would be a major letdown considering where the Bears (3-3) were just a few weeks ago.

They won three straight and took sole possession of the division lead for the first time since 2013 after four consecutive last-place finishes. But they've dropped two in a row since their bye, falling in overtime at Miami and by seven at home to New England last week. The losses left Chicago looking up at Minnesota and Green Bay and tied with Detroit in the NFC North.

Trubisky, who passed for six touchdowns against Tampa Bay before the bye, was 26 of 50 for 333 yards against New England. He threw two TDs and two interceptions.

The Jets (3-4) are trying to avoid a repeat of last season, when they finished 5-11 for the second year in a row. They were 3-4 a year ago, and they see this game as a measuring stick.

It would help if they got more from quarterback Sam Darnold. The No. 3 overall draft pick leads league with 10 interceptions to go with one of NFL's worst completion percentages (56.1) and passer ratings (74.3). The former USC star got picked off three times last week against Minnesota in his worst game as a pro.

"Confidence is fine," Darnold said. "I'm never really shaken at all, but it's just an experience that I've got to learn from."

Here are some things to know as the Bears and Jets try to get back to winning:

With injuries to Quincy Enunwa (sprained ankle) and Terrelle Pryor (groin, released with injury settlement), the Jets were in dire need of depth at wide receiver. They signed former Titans star Rishard Matthews on Tuesday.

Matthews had asked to be traded or released by Tennessee because he didn't like his role in the Titans' offense. He was released last month, and now could find himself a valuable part of the Jets' offense Sunday.

Matthews has 228 catches for 3,147 yards and 21 touchdowns in six-plus seasons with Tennessee and Miami.

With 69 points allowed and just one sack over the past two games, the Bears' defense is taking a beating after dominating the first four weeks.

It doesn't help that outside linebacker Khalil Mack playing through an ankle injury. The two-time All-Pro hasn't produced a sack since he was hurt against Miami on Oct. 14 after delivering five in the first four games. Chicago has gone from leading the league with 18 to being tied for eighth with 19 in that span, and a defense that ranked among the league's best is now 12th overall.

The Jets have been in trouble all season when they've reached the opponent's 20-yard line.

New York ranks dead last in the NFL in those situations with touchdowns in just eight of 23 chances, for 34.8 percent. The Jets have 10 field goals from Jason Myers in the red zone, which raises their overall scoring percentage to 78.3 -- still 29th in the league.

The Bears have issues in the running game even though they rank sixth in the league in rushing. Trubisky has accounted for 245 of their 784 yards, much of that on scrambles rather than designed runs.

With 311 yards on 90 attempts, Jordan Howard is averaging just 3.5 yards per carry.

New York's Bilal Powell was placed on injured reserve this week with a bulging disk in his neck.

That means Isaiah Crowell could see a lot more carries moving forward after splitting time in the backfield with Powell. Crowell has 459 yards and five touchdowns on 81 carries, while Powell ran for 343 yards on 80 attempts.

Crowell has been dealing with an ankle injury since running for a franchise-record 219 yards against Denver three weeks ago, so rookie Trenton Cannon might help.