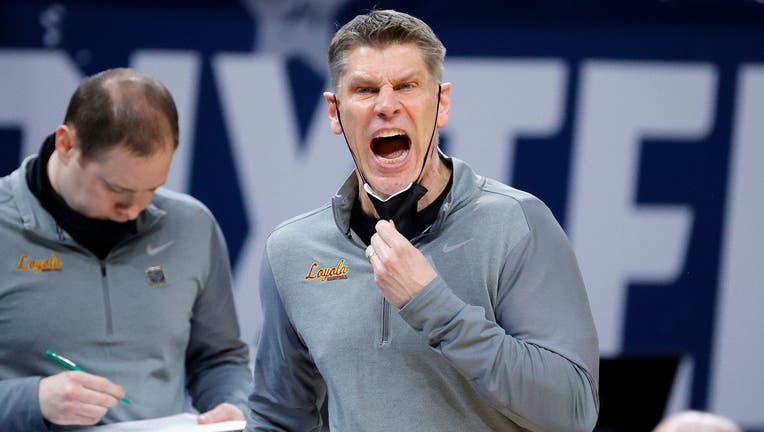 Head coach Porter Moser of the Loyola-Chicago Ramblers reacts against the Oregon State Beavers during the first half in the Sweet Sixteen round of the 2021 NCAA Men's Basketball Tournament at Bankers Life Fieldhouse on March 27, 2021 in Indianapolis, (Tim Nwachukwu/Getty Images / Getty Images)

CHICAGO - Loyola Chicago’s Porter Moser has accomplished enough over the last four seasons to become one of the nation’s most attractive candidates for any coaching vacancy.

The question is whether he wants to continue building on his success at Loyola or test himself at a program from a larger conference.

Moser wouldn’t say which way he was leaning Saturday after Oregon State eliminated Loyola 65-58 in a Midwest Region semifinal. Moser said it was too soon to think about his own future in the minutes after a season-ending loss.

"I just need to take a breath with these guys," Moser said. "It’s been very, very tough, when you build a relationship with these guys and you see the season end."

Moser later was asked specifically about whether he’d have any interest in the Indiana vacancy.

"I need to digest this," Moser said. "I’ve had my blinders on and given 100 percent of Porter Moser to this Rambler team. I’ve blocked out the noise. I need time to digest this with these guys. That’s all I can tell you right now. I have blinders on.

"I know a lot of things were swirling outside around me. I can’t help that. I can’t control that. The only thing I was focusing on was giving 110 percent of my preparation, my energy, my love to these players through this time."

The 52-year-old Moser has 17 seasons of head coaching experience but burst onto the national scene three years ago when he led Loyola to the Final Four in the school’s first NCAA Tournament appearance since 1985.

Moser showed that wasn’t a fluke this year when the Ramblers upset No. 1 seed Illinois and got back to a regional semifinal. Cameron Krutwig and Lucas Williamson were the only holdovers from that Final Four team.

He played at Creighton and was an assistant on the late Rick Majerus’ Saint Louis staff from 2007-11 before taking over Loyola’s program.

His background would make him a strong candidate for any openings at Catholic schools in the Midwest. Marquette removed itself as one possibility by hiring Shaka Smart on Friday.

Moser wouldn’t even have to leave Chicago if he wanted to make a move to DePaul and see if he can translate his Missouri Valley Conference success to the Big East. Indiana had to be impressed by the way Loyola knocked off Big Ten Tournament champion Illinois, which swept its two regular-season meetings with the Hoosiers.

All those opportunities have made Moser the talk of the coaching carousel. He was more interested Saturday in talking about the legacy Loyola has established with these last two NCAA Tournament runs.

"I think people see the Loyola name now and I think they think different things about it than they did six, seven, eight years ago," Moser said. "A lot to be proud of."