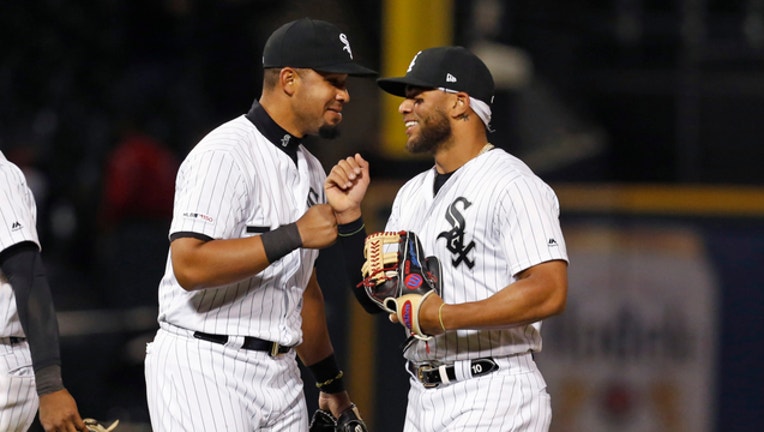 Jose Abreu of the Chicago White Sox and Yoan Moncada celebrate their team's 5-1 win over the Kansas City Royals at Guaranteed Rate Field on April 16, 2019 in Chicago. (Photo by Nuccio DiNuzzo/Getty Images)

CHICAGO (AP) - Yoán Moncada is not looking back at his struggles in the past or forward to the promise of his future.

The 23-year-old switch-hitter said he is having too much fun in the present.

Moncada hit a pair of solo shots for his first multihomer game and Leury Garcia added a two-run drive to power the Chicago White Sox past the Kansas City Royals 5-1 on Tuesday night.

After struggling to consistently produce last year in his first full major league season amid huge expectations, Moncada is off to a fast start with a .333 batting average, five homers and 16 RBIs.

"Last year was last year; it's in the past," he said through a translator. "I learned and now I'm just enjoying this moment.

"Let's just wait and see what happens in a month or two. So far, the results have been there."

Yonder Alonso also homered and went 4 for 4 as the White Sox won for the fourth time in five games.

Reynaldo Lopez (1-2) allowed one run and five hits in six innings to rebound from a poor start to his season. The 25-year-old right-hander had permitted 18 earned runs in 13 1/3 innings over his first three games and gave up eight runs on 10 hits in his last outing against Tampa Bay.

"I think he was just attacking the strike zone a lot better this outing," Chicago manager Rick Renteria said. "I think he just concentrated on driving through and hitting his spots and executing, and I think he did a really nice job."

Daniel Palka, who led the White Sox with 27 homers as a rookie last season, went 0 for 3 with two strikeouts and is hitless in 32 at-bats this year. He is 0 for 34 dating to last season, the longest current skid for a major league position player.

Lucas Duda homered for the Royals, who are 0-5 on the road.

"There are probably three balls that they did damage on, but outside of that, I thought he threw the ball extremely well," manager Ned Yost said.

Duda's homer leading off the second gave the Royals a 1-0 lead. Moncada tied it with a two-out shot in the third.

Jorge Lopez escaped a jam in the fourth by getting Tim Anderson - who began the day leading the majors with a .453 batting average - to hit into a 6-4-3 double play, but the right-hander wasn't as fortunate in the fifth.

Garcia broke the tie with a two-run homer to right-center and Moncada followed with his second solo shot to make it 4-1.

"You have to be really careful because he's going to get you at some point if you make a mistake," Lopez said of Moncada.

Alonso capped the scoring with a solo drive in the eighth off reliever Jake Newberry. Alonso entered batting .152 and raised his average to .220.

Moncada shifted from second base to third this season and also is off to a strong start with the glove. He started a 5-4-3 double play in the fourth and was in the middle of a 6-5-3 double play as part of a shift in the sixth.

"He told me he was the best third baseman in Cuba," Renteria said, "and I'm starting to believe it."

According to the Elias Sports Bureau, it was the first time in the majors both starting pitchers had the last name of Lopez. The previous matchup of starters with the same last name was on Aug. 12, 2017, when JC Ramirez and the Angels faced Erasmo Ramirez and the Mariners.

Royals: C Martin Maldonado was scratched from the original lineup because of illness. "He was going to take it easy and try to play, but no sense pushing it," Yost said. "I was going to give him tomorrow off, but he'll probably play tomorrow."

Kansas City RHP Brad Keller (2-1, 2.45 ERA) and Chicago RHP Lucas Giolito (2-1, 6.19) are scheduled to start the finale of the three-game series Wednesday afternoon. Keller had a career-high 10 strikeouts in his last outing against Cleveland, while Giolito is 4-0 with a 2.40 ERA in seven career starts vs. the Royals.