EAST LANSING, Mich. - Northwestern beat Michigan State at its game, crashing the offensive boards and hustling for loose balls to beat a top 10 team on the road for the first time in nearly five years.

Ryan Young had 18 points and eight rebounds, starting in place of injured Pete Nance, to help the Wildcats hold off 10th-ranked Spartans 64-62 Saturday.

"We matched their physicality and toughness, which was a big key in winning," coach Chris Collins said.

Northwestern (9-6, 2-4 Big Ten) won after Michigan State’s Malik Hall missed a 3-pointer with 4 seconds left and Marcus Bingham missed the front end of a one-and-one with seven-tenths of a second remaining. 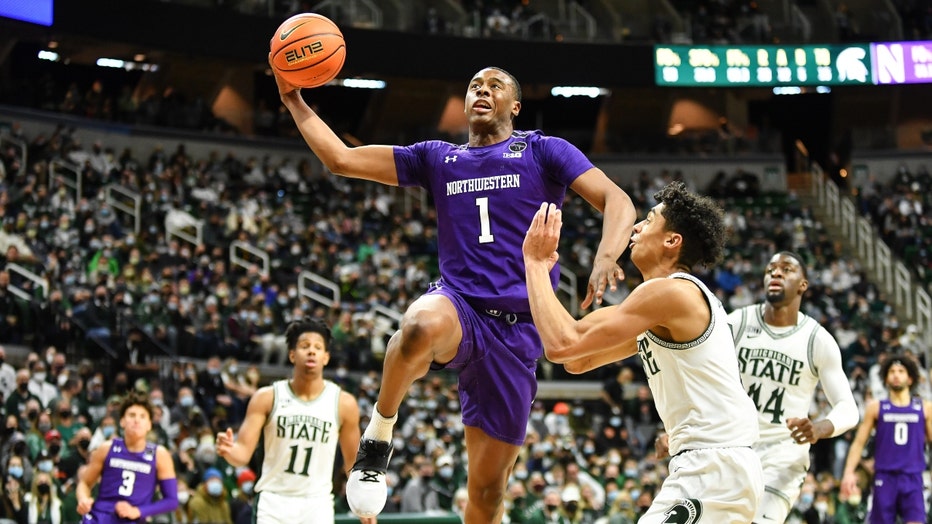 Northwestern Wildcats guard Chase Audige (1) glides to the basket to score during a college basketball game between the Michigan State Spartans and the Northwestern Wildcats on January 15, 2022 at the Breslin Student Events Center in East Lansing, MI (Adam Ruff/Icon Sportswire via Getty Images)

How did that make the Hall of Fame coach feel, knowing he built a top-notch program by focusing on defense, rebounding and effort?

"About as poor as I have since I’ve taken this job." Izzo has had this job since the 1995-96 season. "That’s one of the things we pride ourselves on."

Flipping the script on Michigan State allowed the Wildcats to become the first team to beat a top 10 team on the road while making just 34.8% of attempts since 2005 when Iowa State also shot poorly and still beat No. 2 Kansas.

Chase Audige had 14 points and Boo Buie scored 12 for the Wildcats, whose previous road win over a top 10 team on the road was Feb. 12, 2017, against No. 17 Wisconsin. Northwestern ended an eight-game losing streak at the Breslin Center, where its previous victory was Jan. 21, 2009.

"This was a really important win for us after what we’ve been through here, feeling like we were on the doorstep in three of those four games," Collins said.

Nance, who averages 17 points, missed the game with an ankle injury.

Northwestern led for much of the game, going ahead by seven early in the second half and taking a 62-57 lead with 2:34 left.

Julius Marble gave the Spartans a chance to win with a career-high 18 points. Hall and Gabe Brown scored 10 points each. Freshman Max Christie was held to six points, missing 7 of 8 shots, after averaging nearly 11 points per game.

Michigan State trailed 38-33 at the half, closing with a 4:47 drought without a basket and turning it over 12 times.

The Spartans wished the second half was like the first meeting Jan. 2 at Northwestern, where they trailed by seven at halftime before scoring 47 in the second half to win 73-67.

In both halves Saturday, the Spartans struggled to take care of the basketball in what has been a season-long problem.

Michigan State had 12 turnovers in the first half and finished with 17, dooming chances of extending its winning streak that Izzo wasn’t excited about because of the team’s weakness.

Northwestern outrebounded Michigan State 40-35, including a 17-8 edge on offense that led to 16 second-chance points.

"We really handled ourselves on the glass, which was huge," Collins said.

Northwestern: Collins helped his team beat a top 10 team for the first time since knocking off the fourth-ranked Spartans at home last season.

"If there’s a guy who deserves a big win other than Chris Collins, I don’t know him," Izzo said.

Michigan State: Slow starts, along with turnovers, are testing Izzo’s patience and it led to a loss. Since a win over Oakland last month in Detroit, the Spartans have failed to play well in a first half.

"We didn’t come out ready to play and it caught up to us," Brown said.

Nance was held out with an ankle injury after scoring career-high 28 points and matching his career best with 14 rebounds in a double-overtime loss to Maryland on Wednesday night.

"We had to be smart," Collins said. "We can’t jeopardize him and the rest of the season. Hopefully, we’ll have a chance to have him Tuesday night."

Michigan State will fall in the poll after barely beating Minnesota earlier in the week and losing to a team at home that had won only one Big Ten game this season.

Michigan State: Plays the Badgers on the road Friday night.Northwestern holds on to beat No. 10 Michigan St 64-62