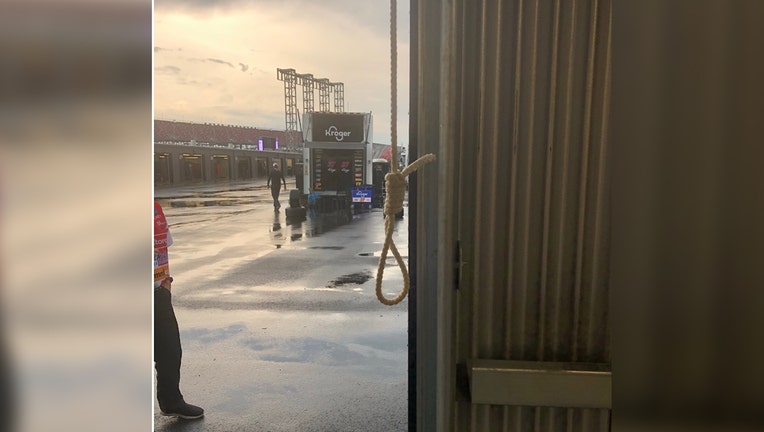 On June 25, NASCAR released an image of the noose found in Bubba Wallace's garage. (Credit: NASCAR)

PINE HALL, N.C. - The owner of a North Carolina racetrack said he has faced death threats, lost employees and seen "all but two" of his sponsors evaporate amid the backlash over his social media post invoking the noose found in the garage stall of Black NASCAR driver Bubba Wallace.

Mike Fulp, who owns the half-mile, dirt track 311 Speedway in Stokes County, told the News & Record he knew his troubles from what he described as a joke were self-inflicted. Fulp's post advertised "Bubba Rope" for sale on Facebook Marketplace the day after an FBI investigation determined the noose found at the Talladega Superspeedway garage had been there since at least October and was a coincidence, not a hate crime.

"I've lost all but two of my sponsors," Fulp told the newspaper. "I'm responsible. I'm responsible for trying to make some jokes."

Fulp said he's been getting death threats and received messages threatening his family.

"My employees got harassed," he said. "I had seven employees quit."

The Greensboro newspaper reported Fulp canceled a "Stand for America" event planned for Saturday for safety reasons but plans to reopen 311 Speedway, perhaps as soon as next Saturday, and follow the state's coronavirus guidelines.

He said he wants "low-profile" racing and he plans to stay off social media. Fulp said he is not a racist in an interview in which the newspaper reported he broke down in tears and sobbed.