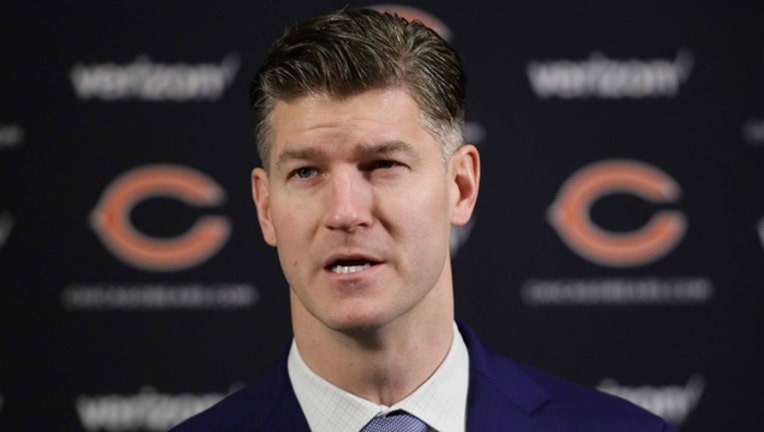 He's just not necessarily buying it.

Pace doesn't see too many big holes on the roster with the draft starting Thursday after Chicago made a worst-to-first jump last season. The Bears don't pick until the third round - at No. 87 - so it could be quiet for them in the early going.

"I kind of know what the narrative is out there, but we feel fortunate with our roster right now," Pace said Tuesday.

"This press conference feels a little different in that there's no pressing, huge needs. We can honestly select the best players. That's a great spot to be in."

The Bears traded their first-round selection to Oakland in the blockbuster deal for Khalil Mack just before the start of last season. And they sent their second-rounder to New England when they traded up in last year's draft to get receiver Anthony Miller.

Pace has no regrets about those deals, particularly the trade for Mack. And when Oakland picks in Chicago's place at No. 24?

"When our pick comes up, Khalil Mack highlights will come on instantly (in the draft room), so that's the first thing that will happen," Pace said in jest.

"But it's still going to be a professional draft room. It's fascinating to watch it unfold. There'll be a lot of friends around the league. We'll see how it all goes down."

The Bears are in a far better position than they were a year ago, after winning the NFC North at 12-4 in coach Matt Nagy's first season. Chicago ended a run of four straight last-place finishes and made the playoffs for the first time since the 2010 season.

The Bears are loaded with a defense that ranked among the NFL's best last season and are counting on an offense led by quarterback Mitchell Trubisky to make a jump in its second season in Nagy's system. But they're also short on trade assets, with just five picks in this year's draft and no obvious candidates to be dealt on the roster.

The Bears already traded one when they sent Jordan Howard to Philadelphia last month, opening up a spot at running back.

"I think there's probably always a story line with every draft," Pace said. "I understand why it's that way, but I don't feel like we go into this draft saying, 'Man, we have to take this position or we're in trouble.' We're in good shape."

Howard struggled to fit in a system that favors pass-catching running backs and wound up with career lows in yards rushing (935) and attempts (250) in his third season.

Even so, he had more combined carries than Tarik Cohen, Mike Davis, Taquan Mizzell Sr. and Ryan Nall - the running backs currently on Chicago's roster.

But Pace insisted the Bears "feel good" about who they have.

He can envision Davis playing a bigger role after carrying 112 times for 514 yards with Seattle last season. He sees two-time Pro Bowl kick returner Cordarrelle Patterson chipping in as a receiver and ball carrier after signing a two-year deal. And he dismisses the idea that the Bears could have gotten more for Howard than a conditional sixth-round pick next year.

"I think there's always a narrative out there, 'Oh, you could get this,'" Pace said. "This is the reality. You know what I mean? We work those channels all the time. We're doing them right now. That's the reality of what it is. We feel good about it. We feel good moving forward. Again, we feel really good about that room and we wish Jordan the best."

The other big issue for the Bears is at kicker.

Chicago released Cody Parkey in the wake of a double-doink miss off the upright and crossbar in the closing seconds of the wild-card loss to Philadelphia at Soldier Field and a "Today" show appearance a few days later that did not sit well with the team's hierarchy.

The three kickers on the roster - Redford Jones, Chris Blewitt and Elliott Fry - don't have NFL experience. But Pace is certainly open to the idea of drafting another one.

"It just depends on where you have the kicker graded," he said. "If he's graded at that value and we get to that place in the draft and that (name) is sticking up there that high, I think you have to explore it."