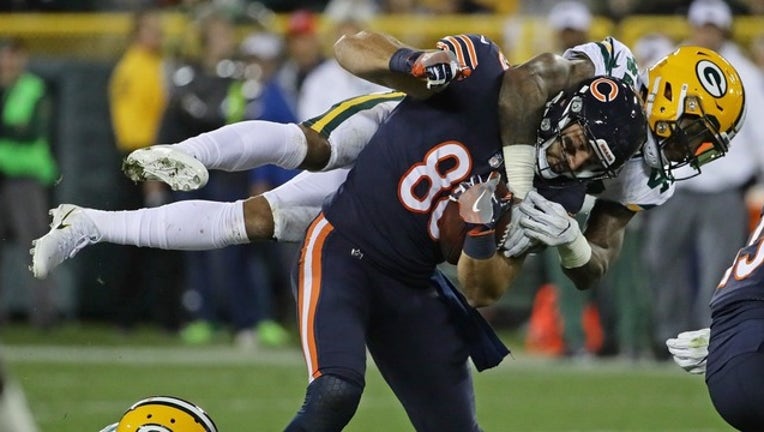 But they just keep finding ways to win.

Rodgers connected with Davante Adams and Randall Cobb on short touchdown passes to help build a 21-0 lead in the second quarter of a game delayed 45 minutes by lightning between the first two periods. The Packers overpowered the Bears down the stretch to slog out a win as intermittent rain fell at Lambeau Field.

"This was a big character win for us," Rodgers said.

The already-depleted Packers (3-1) lost starting running back Ty Montgomery to a rib injury in the first quarter. Adams left the field on a stretcher after getting hit in the head during a tackle by Danny Trevathan in the third quarter.

The game was delayed for about 5 minutes while medical personnel tended to the receiver, who gave a thumbs-up signal as he was wheeled off the field. The Packers said Adams was conscious and taken to a hospital for evaluation for possible head and neck injuries, and that he had feeling in all of his extremities.

"The news I was given on Davante -- everything looks positive. That's a great sign," McCarthy said.

Known as a hard hitter, Trevathan said the hit wasn't intentional. He was whistled for unnecessary roughness.

"I'm sorry about that and you know I'm going to reach out to him and try to send him a message," Trevathan said, "because you know you play a physical game, but you never wish that on nobody."

Other notes and takeaways from the game:

BEARS QB: With two fumbles and two interceptions, Glennon did little to quiet the calls from Bears fans to give No. 2 overall pick Mitchell Trubisky a try at quarterback. Glennon did finish 21 of 33 for 218 yards, but the Bears never recovered from his awful start. He fumbled on his first snap on a strip sack by linebacker Clay Matthews.

The Bears next play on Oct. 9 against Minnesota.

"We'll evaluate everything and we've got a lot of work to do before we line up against Minnesota," Fox said. "We're going to look at everything."

BENCHED: Packers starting cornerback Damarious Randall was benched in the second half for an undisclosed issue. He barely moved on the Bears' opening series after halftime, his arms outstretched at each side while sitting on the sideline.

McCarthy said it was an "internal matter and we're working through it." At one point, cornerback Davon House, who was not active because of a quad injury, sat down next to Randall on the bench.

"Just to shake it off, it's all part of the game as a cornerback," House said about his message to Randall.

NATIONAL ANTHEM: Players, coaches and other staffers on each team locked arms on their respective sidelines during the national anthem. Packers players released a statement this week saying they would intertwine arms before the game as a show of unity. They asked fans to join in the stands and at home, though it didn't appear that many fans locked arms. Many people in the crowd held up small flags during and after the anthem.

Rodgers said he was proud of his team, and that that issue was a "galvanizing situation" for the locker room.

"We could hear some USA chants as it started, which is fantastic. Could also hear some negativity being yelled during the anthem," Rodgers said. "What's disrespectful to the anthem? Yelling things during it, or standing at attention with arms locked, facing the flag? That's for you to decide."

MILESTONES: The Packers are 95-94-6 against the Bears, their first lead in the series since 1933. It's the oldest rivalry in football, dating to 1923.  ... Matthews' sack on Glennon in the first quarter was the 75th of his career, breaking the franchise record since 1982 held by Kabeer Gbaja-Biamila.